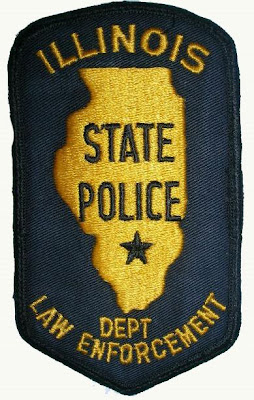 Trooper Mitchell’s speed was determined to be 126 MPH when he lost control and collided with another car killing sisters, Jessica Uhl, 18 and Kelli Uhl, 13. The deadly accident occurred just outside of East St. Louis, IL. Mitchell is presently under indictment and awaiting trial for two counts of aggravated reckless driving.

This worst police nightmare has been a major victory for Illinois criminals. Troopers were ordered to no longer to exceed more than 20 MPH above posted limits to chase violators.

I see the future of ISP enforcement limited to rest stop areas where the troopers can enforce minor safety violations they can observe on foot as vehicles enter. Slow moving trucks will also see much more enforcement now.

Criminals will be laughing as the see the red lights in their rear view mirror disappear as they hit the gas pedal. Any argument that police will show up at the doors of these miscreants is wasted for two reasons. Addresses of vehicle registration are never current with respect to criminals and the person driving the car often is not on the vehicle title.

Ticket revenue will take a nosedive and bank robbers will reap a Bonanza as Illinois highways become the escape route of choice for the FBI’s recent forecast of increased bank robberies because of hard economic times.

Most troopers work in one man cars and with the new limits on speed will be much more careful to avoid stopping dangerous looking violators. All calls for officers needing help will be answered by slow moving responders worrying about their job security.

This could almost certainly have been avoided entirely by improved driver training and by using vehicles more suited to high speed pursuits than the Crown Vic.

First of all Paul, thank you for using the classic ISP shoulder patch before it was "revised" to it's current ugly form.
Secondly, I agree that this is a knee jerk reaction by a bunch of political hacks trying to please the public and the politicians. The trooper who caused this horrific crash made a terrible error in judgment and probably should be fired. There is a great need to weed out those people who don't have common sense and the ability to make good decisions, and Matt Mitchell is one who should have been weeded out in the academy. The state should pay out a multi-million dollar settlement to the family of those poor young girls and then provide in-service training on vehicle control and proper decision making, while at the same time NOT handcuffing the officers working the streets with such a ridiculous policy.

Don't you know the State of Illinois is broke they don't want to pay the family and expect the change in laws to make up for the loss of the two girls.

High speed police chases are generally dangerous, especially if the officers dont know how to drive. First of, police offers shoul be trained in high speed driving and manuvers. And they shouldnt enter a chase without a real reason. If someone is speding and they run, its really not worth it, now if someone has a warrant out for their arrest for a serious crime. Then its worth it to begin a high speed chase to catch the guy. Yea, more people will get a way with speeding now, but thats a small price to pay to avoid the threat ghigh speed chases pose to ofiicers as well as inoocent by-standers.

I guess I don't know the whole pursuit situation here, but I'm assuming this accident occurred somewhere on I55. I've driven CVPIs and despite the lacking power, the cars handle extremely well. How a state trooper could lose control of the car on the runways that our interstates are is beyond me. All police departments have been doing this "don't go faster than X". It's ridiculous. Let cops do their jobs. Trust that your academy is weeding out the bad ones. Let's look at how many troopers get in high speed chases and DON'T kill people. People jump to too many conclusions and the first sign of trouble and don't care how many GOOD troopers there are. only 20 over the posted limit? So now you're going to have people on small motorcycles outrunning ISP. If the guy is going 130 MPH, then backup needs to be called, and this should become a high profile pursuit, never left to one man to take care of. Don't punish all others because one man made a terrible error of judgement.

Do you really think that the cops will actually abide by this law? I don't and how would you prove that they were going more than 20 over the limit if no incidents occur???? So to all the people that think criminals are getting a free pass, your sadly mistaken.