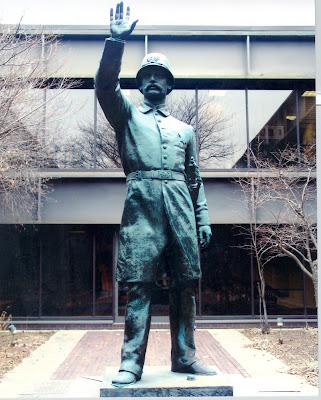 Chicago, IL—The insanity of City officials and the Barack Obama campaign continues. That’s even after serious concerns were raised by many wise, African-American religious leaders that urged people to celebrate in the safety of their own neighborhoods and homes.

Police were told to report for their 12-hour shifts wearing dress uniforms with the trademark checkerboard caps. They were told to bring their helmets but they must be locked up in car trunks kept miles away and inaccessible. Helmets have been proven prevent deaths and injuries. Why is Superintendent Jody Weis putting cops under his command at this additional risk?

The vastly outnumbered Chicago police officers will have no back up from the National Guard. Roving mobs will take full advantage of that fact and its expectable more deadly force will have to be used against emboldened and violent revelers.

We know full well what happens when uncontrollably large crowds of Chicago’s population gather. In 1968 several thousand unwelcomed Communists and hippies came to Chicago. Many were dressed for street combat complete with helmets and gas masks. Despite the presence of the National Guard hundreds of cops and incredibly stupid kids were hurt.

In 1970 the Group, Sly and The Family Stone simply failed to show up at a Grant Park concert. The destruction and injuries to police and civilians was unforgettable to all but Mayor Richard M. Daley.

More recently we know what happens when the Chicago Bulls win a championship. People and cops got hurt, lots of them. None of Chicago’s events will evoke the kind of emotion as an Obama loss or even a cliffhanger election will bring. Never before has any elected official urged a million people to attend any event.

I’d urge everyone to avoid the Grant Park Death Trap and watch the election returns on television in the safety and comfort in your own home.
Posted by Paul Huebl Crimefile News at 11/02/2008 08:03:00 AM

>>Police were told to report for their 12-hour shifts wearing dress uniforms with the trademark checkerboard caps...<<

The Liberals,hippies and beatniks have arrived in Chicago. The highways, in Chicago, are flooded with out-of-state license plates with Obama stickers on them. Tuesday is going to be very interesting, the radical left is now in town.

Sly and the family stone??? holy fuck, are you dating yourself

Yet another brilliant plan from the Chicago Democratic party. Avoid Riot gear as it might look bad for the olympic bid in 2016?

Lets ignore all recommended training and procedures for large crowd control.
Rules that have been established by experts in Law Enforcement education for years.

I wonder if Obama's election committee suggested any of this lunacy?