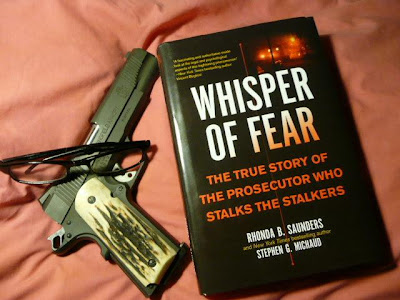 Los Angeles—A lovely publisher’s publicist, Melissa Broder sent me a book to read and review. I read it, loved it and also hated it. I could not put the book down. Yes, I’m going to tell you to get a copy, fasten your seatbelt and take a trip into the fascinating and dark world of stalking.

Whisper of Fear, The True Story Of The Prosecutor Who Stalks The Stalkers is riveting and factual as it takes you inside the frightening stories of victims from different walks of life. A number of celebrity cases are profiled along with others. The authors are Los Angeles Deputy District Attorney Rhonda B. Saunders and best selling crime author, Stephen G. Michaud. I must say I envy the literary skills that created this book.

As a cop and private investigator I’ve been involved in hundreds of stalking cases. Stalking cases are as old as time but the legal definition and laws involving this behavior are relatively new. At the forefront of the battle to direct laws and law enforcement to combat stalking was and is prosecutor and author Rhonda Saunders.

Los Angeles is a unique place for stalking because so many victims turn out to be A-list celebrities who are annoyed, stalked or even murdered by fans with various pathologies. Too many of these deranged folks want to become a part of their favorite celebrity’s history. Two such stalkers that come immediately to mind were Mark David Chapman and John Warnock Hinckley, Jr. Their horrible crimes were the only way these infamous losers could accomplish their twisted missions.

Saunders and Michaud provide a probing; close up tour of the offices of psychiatrists, behavioral profilers, investigators, prosecutors and judges as they deal with this criminal specialty.

You will learn how a majority of these stalking cases begin with ill-advised or improper relationships. The victims are too often closeted homosexuals or married people wandering on the wild side. The stalkers soon gain exceptional control by threatening their victim’s with exposure along with career and marriage ending consequences. From there these things usually go downhill fast.

Now for what I hate about this book!

Particularly in Los Angeles there is a mindset that’s Liberal hogwash and illogical at best. The problem that stalking victims, cops and prosecutors really had was not a lack of stalking laws or getting restraining orders issued. The Liberal judges refused to hand down meaningful jail terms for the stalking related crimes of trespassing, threatening and disorderly conduct. Those crimes universally carry up to a solid year behind bars if that’s what’s needed. The L.A. judges just refused to protect the public.

Instead of standing up to the worthless judiciary Saunders instead went to the California State Assembly and had them make yet more laws that would only add another layer of, too many laws.

The thing I find most egregious is the way Saunders has reinforced a world of victimization and dependency on government for the victims. Nowhere does Saunders offer significant self-reliance or an effective way for these victims to get their lives returned.

Our creator handed all of us instincts that are true gifts, fear and the simplest desire to survive. The founding fathers of this country gave us the right to keep and bear arms. Americans need never cower and hope a call to 911 or Rhonda Saunders’ office will get help faster than they can bleed to death.

I on the other hand will always suggest a quality handgun and training to any sane, sober and rational client of mine with a stalking problem. I tell them to ignore California’s bogus law against carrying concealed weapons. Paying a fine is always better then death or injury at the hands of a stalker. Government has always proven itself to be an unreliable nanny.

The Liberal gun-rights hating California politicians enjoy a brainwashed public that believes that a little training and gun ownership are somehow evil. The only realistic avenue for meaningful self-defense is denied in California’s largest cities. Failure by a stalking victim to obey the un-American and un-Constitutional laws against carrying a handgun for self-defense will always get California prosecutors and judges to act in a hurry to insure injustice.

Absolutely right. Half a dozen well-placed rounds will see off any stalker. But would result in a good deal less business for the 'justice' industry.

Ha were a lot alike. I just finished contributing to a book for a lawyers book. The publishers now has her book.

Once its released ill let I know.

Yes, a good book. Now, you should do one on people who are falsely accused of stalking (like me). Three separate times by the same woman I was accused and she perjured herself almost 25 times. I have all evidence to back up what I am saying. Plus, I am a romantic and romance plays a big part in this story. It's up to you if you want to write a book.