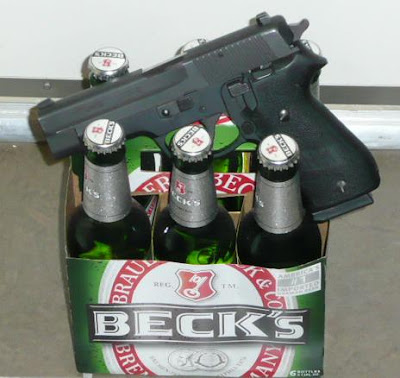 Los Angeles, CA—Sheriff Lee Baca has taken steps to disarm by regulation off duty officers who use alcohol, medication or controlled substances to the point where they are "unable to exercise reasonable care and control of the firearm."

It sounds just fine except for the fact existing laws and department regulations cover reckless and criminal conduct involving firearms. If cops can’t obey simple laws how is a new departmental regulation going to help?

Is this another feel good regulation? Will this lead to total disarmament of off duty officers? Will it lead to attempts to disarm on duty officers? I can see the day when politicians claim on duty officers don’t need firearms except during special circumstances and demand they be disarmed.

The Office of Special Investigations of the Arizona Department of Motor Vehicles has disarmed all their sworn officers long ago. In that case the policy maker was Republican career bureaucrat and soon to be outgoing head of the US Department of Transportation, Mary Peters who is a confirmed gun-rights hater.

Can our politicians get cops to begin arresting each other for carrying firearms?

For decades the certified, trained and sworn officers working for the Glenview Illinois police department have been prohibited by regulation from carrying weapons while off duty. The only remarkable result of the policy was the lack of off duty arrests of criminals for felonies. As a general rule despite departmental policies sworn law enforcement officers cannot be arrested or criminally charged for carrying firearms even in Glenview. Many Glenview officers simply ignored the bogus regulation.

Police officers under the influence of drugs and alcohol very occasionally wind up on the wrong side of the law. Cops are like any other citizen and have the responsibility to control their own behavior. They don’t need one more regulation or law to deal with Lee Baca’s personal nightmares.

It’s simple enough to just encourage cops to not mix intoxicants with firearms.
Posted by Paul Huebl Crimefile News at 11/14/2008 08:40:00 AM