Cops As Soldiers In The War On Gun Owners 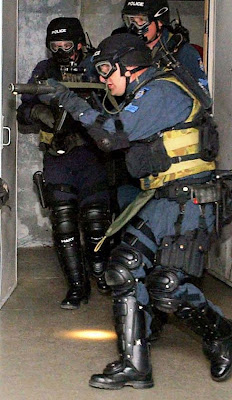 Cops everywhere sign on to enforce the law and keep the peace. As a cop you take an oath of office to defend the state and federal Constitutions and to faithfully perform your duties. Your first duty is that of a protector. Arresting people for petty gun violations and confiscating their only protection is counter-productive and in serious conflict with that effort.

In many cities there is a serious conflict between the Constitutions and the gun laws passed by politicians. Americans have a right to keep and bear arms and too often politicians simply refuse to accept that and want you to knowingly violate their Civil Rights. It’s time to put the Constitution before politicians and their ignorant whims.

No matter if you’re a local cop or an agent with the BATFE simply stop arresting people for vague technical violations and carrying guns for self-protection. Instead concentrate on criminals with guns or those fools introducing guns into arguments, drug dens or involved in other misbehavior.

A good beginning is to back off those middle-aged gun collectors for failure to register or those with guns in the Gun Free Zones unless other criminality or unjustified violence is involved.

This is a way you can do your part to keep a safe and strong America. You also give these Americans a better ability to survive a criminal attack. Nobody will give you Department Commendations for this but you will be in a better position when you get your turn at St. Peter’s gate.
Posted by Paul Huebl Crimefile News at 11/09/2008 10:09:00 AM

As a career cop, this is the point I have been making for many years.

There is a distinct difference between being a "Peace Officer", who enforces laws judiciously, based on keeping the peace while being conscious of one's proper role in society and in being a "Law Enforcement Officer"; those who swarm among the citizenry, enforcing each and every law on the books because "it's the law".

It would pay to develop an understanding of "malum en se" vs. "malum prohibitum" laws and to act accordingly.

One's oath to support and defend one's State Constitution and the US Constitution, should take major precedence over one's secondary oath to "enforce" laws.

Good way of putting it,Paul. I meant to write something like that one of these days.
I worked in the DePaul area before I retired; I had several citizens walk up to me with their families while vacationing in Chicago. The male would tell me he has CCP in his state and his gun is in the hotel and could he carry it. I had to explain the dictatorship he was in; and not to trust all Officers w/that info. I would put them at ease and tell them I was in the NRA, and support their rights in spirit.
Also,your plea to not enforce immoral gun laws on decent citizens
shouldn't be too hard for the CPD troops to swallow. After all, that
pos daley has been telling the Police for years not to enforce the federal immigration laws on violators.Sanctuary city my ass..

St Peters gate is a fairy tale. Where either saved or were not. If were not at the time of death, then its too late. John 14:6, John 3:3