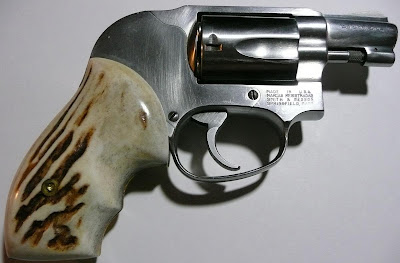 Phoenix, AZ—It was 21 years ago in October when I had to do the unthinkable. I had to use deadly force to survive an encounter with a drunk armed with a .45 ACP Colt Gold Cup.

The shooting took place outside in nearly total darkness. I was pistol whipped in the head with the big semi-automatic pistol. I reacted quickly pulling this Smith & Wesson .38 Model 649 Bodyguard. I fired five shots at my attacker critically wounding him and stopping the attack cold. The ammunition I used was Winchester Silvertip hollow-point, plus P.

The stopping power of this little gun was anything but impressive. My assailant remained standing and never dropped his gun in my presence.

The grips were of my own design. I submitted a proto-type to a dear friend in the gun grip business. The Secret Service grip, manufactured by Eagle Grips of Carol Stream, IL was born.

It was an amazing feeling to be able to reach and put my hand on these grips during a terrifying event. My fingers rested in the finger groves and the little gun filled my hand.

Okay I must say such a small gun in hindsight was a crappy idea for self-defense. When the chips are down you want nothing less than a fully loaded, HK/ Benelli .12 gauge convertible M3 Super 90 shotgun.

The fact of the matter was, I was able to flawlessly draw and fire the little Bodyguard with full confidence I could hit the looming attacker and did so with every one of the five shots. I’m alive today as a result.

The grips pictured are nearly impossible to obtain. For one, they are made of Sambar stag and have been banned from export in India except for a verry limited new period. The second reason is that this kind of stag is almost never large enough to make a Secret Service style grip.

Eagle does make the Secret Service grip in Ebonywood, Rosewood and the exquisite Buffalo horn. They are made for virtually every revolver and can be found on the Eagle Grips website.

From the day the Secret Service grips hit the marketplace they have been copied by everyone. I’d avoid getting those rubber knockoff s since the rubber grabs clothing and your concealed revolver will print through your clothing.

Watch that impressive shotgun I talked about in action.

I own many guns, but all I seem to have on me all the time is my AIRWEIGHT/BODYGUARD w/pach grips. Yea, its a weak gun, but w/that shrouded hammer, u can put it in a pocket,inside coat pocket, etc and its easy to get to,easy to draw, easy to hide and wont jam.
Lifes all give & take.
And it was good enough for Saigon's Police Chief(tet68)...

The Illinois State Police used the silvertip hollow points way back in the late 70's. Then one summer afternoon, a rookie trooper and his FTO in District 5 stopped a biker and ended up in a shootout with him. If my memory is correct, the biker was hit about 20 times by the troopers Smith & Wesson model 39 9mm pistols and he still managed to drive away on his bike, where he subsequently died a short time later. Needless to say, the ISP quickly recalled all of this ammo from the field and switched to something with more stopping power.

I can only imagine what went through your head after unloading five rounds and seeing the guy still standing. Definitely a code brown moment!! Glad you lived to tell about it.

What was the outcome of this? I'm guessing you phoned a lawyer first... did you have any legal consequences as a result?

Paul great blog piece. Paul what kind of shells does it allow, and what are you shooting in your Benelli in that video?

Its way too much kick so I only have those loads in my shoulder sling for the more serious challenge.

Then also having a few hollow point rifled slugs in my butt sleeve are a great option for that one sniper shot.

Regarding Thanksgiving. Remember this Nation was built with four tools.

Do you ghost and extra round on that bad boy??I love my M1S90 and M4 SGNs.Benelli is the Rolls Royce of combat shotguns.

stumbled across this post after searching "my favorite revolver." i have rosewood eagle secret service grips on my SP101. they are mighty fine looking, and make drawing from my pocket 100% smoother than the factory rubber grips. can't say enough times that i LOVE my secret service grips!!

This is awesome work. I have read the article and it seems to me very innovative indeed. Want to really see some more update here. Keep it up man.