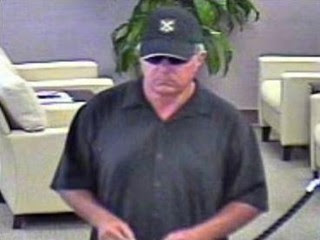 The usual evidence is surveillance photographs and eye witness identifications. After a fourth stick-up in Rancho Cucamonga a suspect was caught up in the dragnet. The suspect in custody was none other than 61 year-old Frank Holder, a well respected, retired Pomona police sergeant of 30 years honorable service.

Holder, a Phelan, CA resident has had his home, vehicles and property searched. The FBI folks are examining every bit of his financial records looking for anything at all to tie him into these crimes.

Holder is currently being held without bond until an appearance before a federal Magistrate in Santa Anna.

We can only hope this is a case of mistaken identity.

A sad update 8/20/09:
A retired police sergeant has pleaded guilty to robbing two banks in holdups that earned him the nickname "The Grandpa Bandit."

Sixty-two-year-old Frank Holder of Phelan entered pleas to federal charges in Riverside and is free on bond.

A federal prosecutor said Wednesday Holder is expected to get a three-year sentence and must repay about $4,000.

Holder worked for the Pomona Police Department for 30 years and retired in 2004. He had no prior criminal record.

He pleaded guilty to robbing the banks in Southern California last October. Authorities say he had a gun during the holdups but never displayed it.