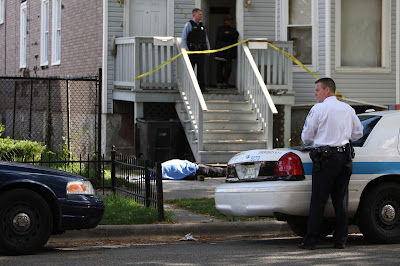 Photo by Mike Anzaldi (click on it to enlarge).

Chicago, IL—Mayor Daley has tried hard to sweep things like murder under the rug. His gun bans have backfired enabling armed criminals to victimize the law-abiding.

It makes perfect sense to violate the civil rights and arrest those who dare take photos of violent crime scenes for publishing purposes. Such was the case of the newsman who took this photograph from outside police lines on private property where many others were lawfully observing the ongoing police activities.

Civilian police media flak, Monique Bond ordered the police credentialed news photographer, Mike Anzaldi to stop taking pictures and video. When Anzaldi dared continue, he was arrested and his cameras were confiscated. Police deleted the images that were later recovered with the use of special software such as the one above that were were published anyway.

Anzaldi has obtained support and legal counsel needed to challenge the bogus charges lodged against him for obstructing police and to address the criminal and civil misbehavior of the Chicago Police Department officials involved.

This really dumb police response reminds me of another similar incident where Chicago Aldermean and police officials arrested a painting at the Art Institute of Chicago.

Paul,this Department is a shell of what it used to be, what it was when you were here and it's people like this Bond character that have helped make it that way. I've only got about a year left and then it's bye,bye. And when I do go, I very much doubt I will ever tell anybody where I worked.People like her, Masters, Daley, Weis and a host of others have just about completed the wholesale destruction of the Chicago Police Department!

signed-
A white shirt who used to be proud