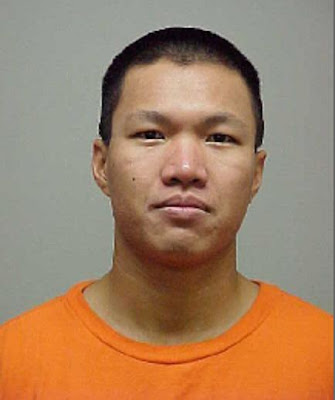 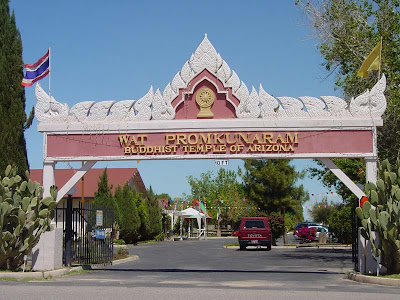 On one hot August night a bunch of young would be adventurers raided the living quarters of the Wat Promkunaram temple of Waddell just West of Phoenix.

The temple exists because so many of the Viet Nam Era servicemen at nearby Luke Air Force Base brought home wives from Thailand that were Buddhists and needed a place to worship.

The Temple and attached living quarters became a bloody scene of a seemingly senseless mass murder and robbery. Nine people were found slaughtered including six monks, a nun and two helpers by a temple housekeeper.

I was dispatched there by the news director of the local CBS affiliate to investigate as a field producer. I was with reporter Bart Graves and photographer George Schram.

Graves noticed strange behavior exhibited by two Amerasian older teens. Jerry Hastings and Matthew Miller who were alone but near perhaps 50 onlookers from the area. The lads were trying hard to find out what Sheriff’s investigators were saying. Their own brother Michael Miller was one of the murdered temple helpers.

There were nearly 100 press people, live trucks, satellite trucks and cameras were rolling. Schram somewhat surreptitiously, shot video of the two and I intently watched the tape of two nervous and fidgeting boys whispering to each other inside the live truck.

I took that observation football and ran with it. Later that night I went to the home of those two teens in search of interviews. It was dark as I quietly approached the home of a retired Air Force serviceman and his wife.

I could hear a man’s voice. He was yelling at someone. I could hear, “What were you guys thinking?! Don’t you know they will put you in the gas chamber for that?!” That got my attention and I continued to eavesdrop. I heard the words, “Dad, it just happened!” Soon the voices were lowered and I could no longer hear what they were saying.

I knocked on the door and I told a very angry, Steve Miller that I was hoping to talk to him and perhaps his family members. Miller said, ”We’re all grieving here and have no comment!” He slammed the door in my face.

I suddenly knew who was involved in the killings right then and there. I did not know nearly enough but I Knew more than any other law enforcement investigator.

Sheriff Tom Agnos had no idea the investigation handled by his officers would become a major train wreck. His men went out like wild Indians kidnapping and abusing anyone and everyone except the killers.

Through my own investigation I soon learned that there was reliable information that some monks were believed to be dealing in large amounts of heroin imported from their homeland. The killers were for the most part insiders who expected to find suitcases of cash and drugs. I verified the information from DEA sources, court records and many interviews.

Before it was over taxpayers paid millions for the horrible investigation and many millions more to settle the lawsuits. Four innocent lads from Tucson were arrested and later confessed but were freed after many months of sheer Hell. Eventually Sheriff Agnos put a gun to his head and took his own life. I can’t be sure but the massive mess that brought about his political defeat may have been part of the depression he was suffering.

Eventually the only major break came from Air Force Security police that stopped a couple of boys with the murder weapons in their car. This was no resolution by a long-shot. The weapons languished in storage and went untested for months. Finally firearms examiner Bill Morris determined the guns picked up on the base were the murder weapons.

That took police to their second set of suspects Rolando Caratachea, Alessandro Garcia and Jonathan Doody. Garcia not only confessed to the massacre he offered himself up in an unrelated earlier murder he committed of a legal secretary who went camping alone.

17 year-old, Jonathan Doody was relentlessly sweated by police until he gave them what they wanted to hear. Personally I never believed Doody’s confession. Doody was not “cool” enough to be accepted by the others.

Since the Sheriff's department was so incredibly effective in getting phony confessions in that particular case any confession was nearly meaningless. Doody was convicted at a trial based on the confession and given 281 years beating the death penalty only because of his age.

Famed lawyer, Alan Dershowitz took up the appeal of Doody. Doody or his stepfather had little in the way of funds for a big gun like Dershowitz so I have to assume it was done pro-bono.

When Dershowitz and his lower profile brother and law partner came to town I had lunch with them, temple officials and Doody’s stepfather. I knew Dershowitz had an uphill battle that would take a years or even decades.

The decision by the 9th U.S. Circuit Court of Appeals involving Doody’s confession has overturned the murder convictions of Johnathan Doody. He will be freed unless he is retried or the government successfully appeals. Without the confession there’s just no case.

I remain convinced that at least three others involved in this horrible crime escaped justice. I’ve always been satisfied with Garcia’s arrest and guilty plea was just and proper.

As for Jonathan Doody, I have always doubted his part in this since the others involved did not like him. Doody should be freed and somehow salvage the rest of his life. I don’t anticipate prosecutors having success in keeping this product of one of the worst police investigations in American history validated.