The Maxwell Street Of L.A. 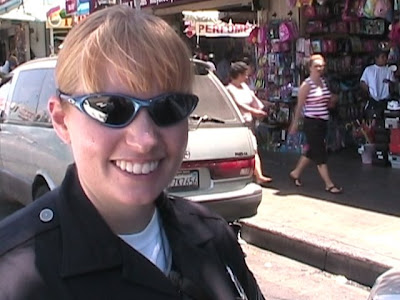 For my Chicago readers there was the old neighborhood called Maxwell Street. You could buy anything there but you had to keep a sharp eye out for rip offs and scams. That Rolex watch at an incredible low price will turn your wrist green and stop dead in a few days.

The four gallons of high quality deck enamel you bought may turn out to be tap water once you get home, open the cans and start your project. In fairness the market could save you a lot of money and it was fun. The air had that familar smell of Vienna hot dogs everwhere. Urban renewal brought the death of Maxwell Street as I knew it. Gone today are the street vendors that gave the place character.

Maxwell Street has a nickname, Jew Town or JT for short.. That’s because the property owners and vendors were predominately Jewish. The employees were mostly African-American. An interesting culture of sorts was born as a result. Many Africa-Americans named their children after their bosses. Names like Seymour, Morris, and Jacob were common monikers for many of these dark skinned kids.

In L.A. it’s called the Fashion District near the downtown area. The property and shops are owned by Asians and the workers are Mexicans. Nobody checks things like Green Cards and on payday they save paper by not writing checks. I guess cash is sufficient!

The same consumer issues exist in the Fashion District about poor quality or worse. The proliferation in pirated designer labeled clothing and DVDs of the latest Hollywood films are everywhere. Then there are many quality items you can round up as you save a bundle over mall prices.

This Sunday I met a great gal, Officer Traci Allen of LAPD’s Central District. Traci was the only law today in anyone’s sight. Allen knows her beat well along with all the usual suspects. She was both delightful to talk to and no shrinking violet as a lawman. Yes, I said lawman because I will never recognize this job as gender neutral. It’s a man’s job some exceptional women can do.

Officer Allen has our 12th District boys and girls beat. She’s never had to do traffic control for snow removal. Allen seems to fight crime in a sort of cat and mouse way. The sellers of pirated films display their wares on the sidewalk keeping an eye out for the heat. When Allen is close enough to see much of anything, the pirates scoot away leaving their abandoned booty behind. Allen bags the goods for later reports and evidence inventory procedures. There are lots of uniformed security guards around that look out for Officer Allen.

My friemd Raj Singh and I did a little shopping amd I captured the sights for a YouTube moment.

Here’s a short video that contains a special message from officer Allen for the fine Chicago officers of 012.

T.A is cute,is she single?I'm planning a trip to L.A and have my own bacon wrapped sausage.

I wouldnt slam her too much,looks like she has them all,they are straight,no gaps.Not the typical girl that many degenerate coppers go for.I would let TA strip search me anytime.