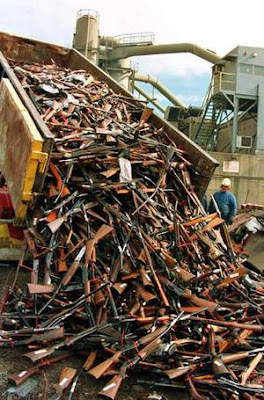 Washington D.C.—With the Heller case not yet decided, Brady Campaign Chairman Paul Helmke conceded defeat recognizing 75% of Americans believe that the Second Amendment is an individual right. Helmke announced that he expects the Heller case to be a lost cause for gun prohibitionists.

Helmke hopes the loss will bring about some sort of a political mobilization intended to get a reversal of the Heller case down the road. The gun prohibitionists have hope of still seeing bans on “certain” firearms and other harassment tools for government to use against gun owners.

The gun ban crowd wants to bring in new Liberal, activist Supreme Court judges to rewrite rather than interpret the Constitution. They have high hopes that the reduction of gun control issues in the political arena will help Democrats gain many more seats at all levels of government.

The experience of the NRA’s membership swelling to 4 million after the now expired assault weapons ban was enacted and then dramatically declining once the ban ended is the best example. Their loss of the Heller case may have a similar effect on the gun banners. I don’t expect the gun rights haters to take this defeat without screaming their heads off.

Don’t look for the prohibitionists to search for any real and effective ways of reducing violence. The real joke is these people will never support extended stays for violent criminals as they blame guns for violence rather than the robbers, rapists and killers that misuse All manner of weapons. They only want long prison terms for legitimate gun owners.

The Supreme Court’s Heller decision will be published here at Crime, Guns and Videotape in its entirety. The countdown is only nine days! Of course they could decide this Monday morning.
Posted by Paul Huebl Crimefile News at 6/14/2008 06:57:00 PM

Email ThisBlogThis!Share to TwitterShare to FacebookShare to Pinterest
Labels: Heller

I originally had high hopes that the Supreme Court would do the right thing when they took on the Heller case, but after their decision last week regarding the Gitmo terrorists, I no longer feel confident that they will make the right decision. These liberal judges will be the end of us.