Learning From Hitler and Stalin, The Neighborhood Safety Zone Is Here! 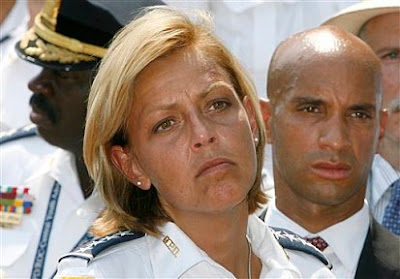 Washington D.C.—Freedom has been dead in the District of Columbia for three decades. The Leftist politicians have created an ignorant, totally dependent and lawless society through repression and giveaway programs. The unlawful D.C. gun ban has emboldened the District’s violent criminals who have dominated the inner-city population.

Conservatives warned about the catastrophic consequences of ending personal responsibilities, punishing productivity through excessive taxation and rewarding failure with handouts. D.C. Like other major cities run by the Far Left Fringe politicians is a complete social failure.

These anti-American social experiments, was nothing less than racism and even genocide. The victims are African-Americans who can expect to remain at the lowest possible rung of human development. One can only guess how long it will take to undo the damage.

Now two fine examples of totalitarian style government are introducing Nazi style checkpoints to restrict movement of American citizens in the name of Public Safety. They are, Mayor Adrian M. Fenty and the head of his Gestapo, Cathy L. Lanier.

I look upon this as an act of war against Americans by the D.C. government and if the courts won’t quickly step in to correct this outrage I’d personally consider Americans who’d use force and violence to end this program patriots and heroes.

Most residents of D.C are far too ignorant, dependent and helpless to understand or try and protect their own rights.

Fenty and Lanier must be stopped our democracy is at stake.

Clearly, DC is a mess. And disarming the law-abiding citizenry is in violation of the constitution (as we're all hoping the Supreme Court is about to agree).
But I do have to contrast this with Sheriff Joe Arpaio's approach to illegal aliens in Arizona where his so-called "neighborhood sweeps" and detention of relatively large number of Hispanics, *some of whom* turn out to be illegals who are subsequently deported but also some of whom are not here illegally.
And I am also reading Kenneth Ackerman's "Young J. Edgar" [Hoover] and, in this context, about his arrests of suspected Communists and how many of those were deported versus how many they detained (and interrogated, sometimes with illegal force).
Stopping crime when it reaches levels such as seen in these instances (in Washington DC, concerning the illegals or Communists attempting the violent overthrow of our govenment) is obviously very difficult.
What I expect from my "public servants", whether elected officials or street cops, is two-fold. First, I expect them to follow the laws as well as uphold them. But secondly, and admittedly somewhat in contradiction to #1, I expect them to recognize, yes to "judge", when they are dealing with the worst of the worst, and to take the necessary steps to stop that crime, and to do so in such a way that is judged by outsiders as legal.
Nixon's problem was not that he committed a crime but rather that he got caught. I expect my politicians to be effective. Nixon got caught and was, therefore, ineffective.
There is a line that can't be crossed and I'm sorry I can't describe better where I see that line in the sand. But I do see it, and the DC politicians have stepped way over it in denying US citizens their constitutional rights.
Joe Arpaio hasn't gone over that line although, admittedly, he's stepping pretty close to it. But that's OK -- close is good, over is bad.
J Edgar Hoover? It looks like he might be the best example of what I'm trying to express.
Understand the system in all its visible and non-visible aspects, and figure out how to get the job done.
If I'm sitting on a jury for a murder trial and the defendant's attorney (and PI) convince me that the dead guy was a vile scum bag who needed to be removed from the face of the Earth, you can darn well bet I'll take that into account. There may be limits to what I can do from that jury box but I'll sure find out what I can do and go about doing what's needed.
Sometimes you do what's hard, sometimes you make the sacrifice, because it's the "right" thing to do.
Washington DC, like several other cities and states, is wrong, wrong, wrong on the handgun issue and they're starting to pay the cost for their stupidity.
Hope the Supreme Court does the "right" thing. We sure need it.

This is communism, nothing more. The government (DC) determining where you can go or if you have a "legitimate" reason to go there.

This is America, land of the free.....unless you're in DC.