Israel Must Bomb Iran This Summer! 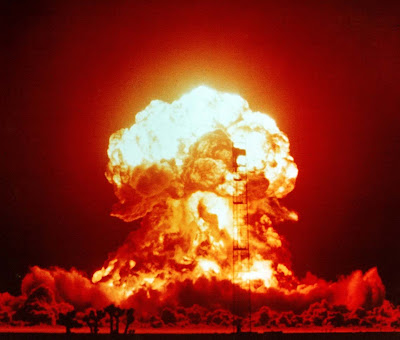 At least that’s my reading of the predicament facing the leadership of Israel. We all know that Iran’s President, Mahmoud Ahmadinejad is a holocaust denier who has vowed to destroy Israel. In addition Iran’s current nuclear ambitions are provocative and threatening.

Why must Israel attack this summer you ask? American politics is the answer. Bush, who has a track record as a defender of Israel is set to leave office. Our election is deemed too close to call and Israel’s leaders know that Barak Obama is not committed to doing anything other than withdrawing American troops from that part of the world.

Obama’s cozy relationship with the American born Nation of Islam also must trouble Jews worldwide. Obama can’t be counted on to provide more than lip service should Iran follow up on threats against the Jewish state.

Waiting for America’s November election to be settled would be too dangerous for Israel since Iran is getting stronger every day. Israel must act now or risk not having any backup later.
Posted by Paul Huebl Crimefile News at 6/07/2008 03:56:00 PM

We need a federation of Israel-Plaestine soon with one man one vote. We can't waste more time defending the Israeli's foolishness attacking another country. Iraq war was started by Israel Lobby; we are the one who is paying for the war by our blood and money.

Obama can’t be counted on to provide more than lip service should Iran follow up on threats against the Jewish state.

Sometimes the opposite applies. Afraid of seeming weak, the more pacifist presidents are more inclined to attack. Consider Kennedy and Cuba and Vietnam.

it will be here soon... Everyone forgot 911 well its due again