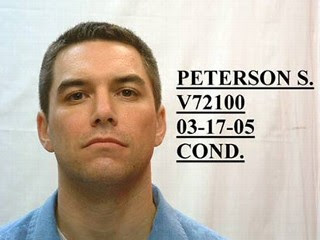 Modesto, CA--Scott Peterson stands alone as a convicted and condemned killer where no evidence of murder ever existed. Peterson’s pregnant wife Laci died for sure, but it’s still unknown what caused the woman's death.

I believe Scott Peterson was convicted because of the efforts by those Court TV harpies, led by that lynch’em, lightening rod, Nancy Grace.

It was a trial by hate that convicted a cheat, liar and womanizer of murder sans a simple cause of death. The jury had to assume that Laci Peterson was murdered, and then leap to convicting Scott Peterson of capital murder.

Laci Peterson’s parents have filed a wrongful death civil case against Scott Peterson. That’s far more complicated than it sounds. If Peterson chooses to testify in the civil case he must be removed from Death Row of the San Quentin State Prison to a Modesto, CA jail cell for the civil proceedings.

This is where the fun begins. Scott Peterson has nothing to lose and everything to gain by standing trial in a civil court. This is the kind of thing defense lawyers live for. This lawsuit is more than a gift, it’s a way to reopen the entire case, re-examine witnesses and re-test the physical evidence all over again.

The court is going to hear a plethora of inconsistent testimony by government witnesses. With fresh subpoena power, defense lawyers and investigators can find what they missed or mistakenly felt would not be helpful the first time around.

The civil jury will hear about shoddy police work, evidence tampering and the unbridled greed of Laci Peterson’s divorced parents.

Peterson’s former girlfriend, massage parlor worker, Amber Frey will have her butt right back in the hot seat for a brand new round of examination and cross-examination.

Frey has a lukewarm IQ at best, how is she going to remember the crap her writer attributed to her in her literary offering, “Witness: For the Prosecution of Scott Peterson”? How did profit from book and film deals influence Frey’s testimony during the criminal trial?

Frey has serious credibility issues. In 2005 it was revealed that Frey snookered a man, Anthony Flores into paying child support for her daughter that was fathered by another man. Flores paid Frey for four years before the scam was revealed by DNA testing.

The Scott Peterson case is old news and the media attention is far less likely to influence a jury.

It’s difficult to imagine but what if the civil jury can’t find enough real evidence with a much lower standard of proof than reasonable doubt needed find Peterson liable?

Stay tuned, this is destined to make history!

They will also hear that much of the 'expert' witness testimony was wrong to the point of being fraudulent. This case reinforced my opinion -- unless you have OJ money, let the state pick up the tab for your defense. You can't compete with the $11 million the state spent to convict Peterson. Spend your money on as many competent investigators as you can. They are much more likely to set you free and they can't do as badly as the state: 20,000 hours of police time to find - one hair? A cement stain? They didn't even find the bodies.

Hope this isn't a double - Google did something odd.

This is for you, not really for posting.

This takes two minutes to read:
The Evidence

This takes one minute to read:
The prosecutor's case?

No satanists, conspiracies or alien abductions. Just a horrible crime that has happened before and should have been obvious to everyone except an idiot like Grace. If you understand evidence (unlike many lawyers) you may find it interesting.

It was a trial of hate with no evidence is exactly right. I also believe Sharon Rocha's grief combined with the shock of Scott's fling with Amber blinded her and she was easy prey to be manipulated by the MPD and the constant media demonization. Analysis of the facts show Scott to be innocent. The fully intact baby with twine tied around his neck is only one issue. There are many. An innocent man is on death row.

A time line was base on a person who lived next door to the peterson said she found mckenzie the dog at 10:18 or 10:30 a women claims to hear screems at 10:15 to 10:30 near a park bathroom where near her home. a witness diane campos see two dirty men walking with a laci look alike & with dog yet the mdp did not see a connection that lacie may have let the dog go and he ran back to the house . the woman who put the dog back in the yard was not really sure if at 10:18 or 10:30 she may have unknowing witness lacie being taken at the park when she found the dog.

A true hero is one who could be strong enough to say we made a huge mistake even if they stand alone. I can not get pass the burglary at the medina home as being notting when a young beauty of a woman may have been the victime of an abduction. by a team committing a burglary right across the home of lacie and scott. why would a woman who may have a connection to the men in the medina burglary - brake into the peterson home to remove items or place back items in the home be seen as notting. why would a detective claim he never pick up a tape re:conversation by men who may have a connection to the burglary in the medina home. I hope that before we put a needle in scott peterson that we should not have a doubt to any evidence that may have put others as culpable. yes like some husband he may be a jerk for he had a beauty of a wife and soon to be son ,did not appreciate the love a real woman to find himself in such a deliberate state of life and death.

This case seems to have faded away since the judge ruled that the plaintiffs would have to actually prove their case. That caused much pantie bunching for the harpies, who seem incapable of grasping that an opposite ruling might have released O J Simpson and Robert Blake from their civil liabilities.

I have always believed from the evidence that Scott Peterson is innocent. I have read it all and believe his cheating got him where he is. Very sad.

Hello, I'm on the opposite coast and have been following and staying in tuned to Scott's situation from the go. It was beyond incredibility to me how a person could be sent to death on the basis of pure circumstance, and seeing the prevalent lust and call for blood that was so clearly evident in the immediate courthouse community, it should have been within that judges' ability to eliminate the injustice of the wave of what was affecting society, and branching in to affect Scott. Horrors, a trembling nightmare. Although it does take true intelligence to withstand an ordeal, like that where.... Well, let me say this, I'm Cath. too, And we all know the pagans have called for our blood many a time. It's well past time people commit to living by the patterns God Almighty Himself Wrought In His Perfect Design, and Truely Begin To Have Life. Peace. d.THO

Amber's claim that she didn't know Scott Peterson was "her" Scott Peterson until Dec. 30th --when the news coverage was wall to wall and everyone was talking about it on the night of the 24th, is absolutely incredible.
Her police friend Richard Byrd spoke to her on the phone for 24 minutes at 8:30 am christmas morning. As one wit has said, "I don't think they were talking about Santa Claus."