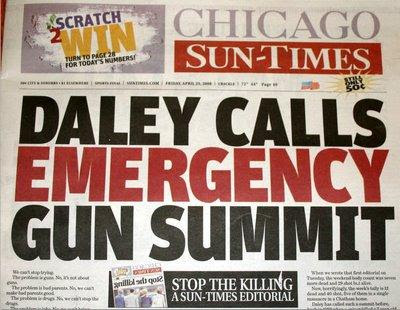 Two classes of Chicago’s population just won’t cooperate with Daley’s gun ban. First there are those gun owners that just refuse to accept government’s presumed authority to outlaw guns and legitimate self-defense. Then there are the criminals that rob, rape and murder who don’t obey any laws.

Mayor Daley hates anyone who violates his gun ban and could care less what methods police employ to get those guns away from the population.

The methods of some of Chicago officers ran roughshod over the Constitutional Rights of those gun owners. When the complaints of illegal searches came in, they were simply shelved by Daley’s administrators within the police department.

I have a long-time, close friend who was victimized by these illegal and un-American methods. He was a wealthy insurance company owner who lived in Marina City.

My friend became a gun collector who assembled one of the finest collections anywhere. He had many hundreds of fine pistols, revolvers, rifles and shotguns. He had a WWI solid brass antique cannon on his balcony arranged with fabulous flowers.

My friend also obtained a federal firearm collector’s that allowed him to buy and sell firearms across state lines like a dealer.

The guns in the collection were either unfired in their original boxes or as clean as the items could be found anywhere. Few of these weapons were fired as not to lower their collector’s value.

As for my friend’s collection, he was diligent in registering every weapon. I helped him in that labor intensive task. Registration was free at the time. Then the local politicians changed the law. They required re-registration of all privately owned firearms in Chicago.

With the new law came a curious exemption from registration extended to “licensed sellers of firearms”. It was curious because all the gun dealers but for one wholesaler were run out of Chicago. They could have exempted licensed dealers rather than sellers but they didn’t. Licensed collectors were in fact licensed sellers so my friend saw the exemption and did not re-register his collection and pay the thousands of dollars in new fees to the city.

My friend wanted to be able to carry a gun and in Illinois there existed no provision to be able to do so through permits. My friend quickly found a way around it by getting himself appointed as a one day a month Cook County Deputy Sheriff.

With minimal training he not only got to carry his gun but had full police powers. He liked that role and when he retired wanted to enter law enforcement.

A position became available with the Cook County Adult Probation Department and my friend sought and obtained that job. He did it for several years until some rogue cops changed his life.

The Chicago Police Department established a Gun Team to go after those people who did not re-register using previous portions of the city’s registration database. Rather than go out an interview my friend about his collection the Gun Team took the low road.

The officers found a former Chicago cop who had troubles and simply fabricated him as an informant. They also fabricated the information they claimed he gave them.

Of course there was not a single instance of my friend transferring any guns to anyone. He was a collector only adding to his collection and never selling anything.

The well orchestrated and publicized raids were conducted. The bulk of the seized firearms were taken from a room that was converted into an alarmed vault with special military gun vaults inside.

The gun team removed all the guns from their boxes and paraded them past the eager reporters who were painting my friend as mad, middle-aged terrorist. Soon the members of the Gun Team received Department Commendations for getting this man’s exquisite firearm collection off the street.

There were no felony charges to then, Cook County State’s Attorney, Richard M. Daley’s lament. There were instead hundreds of Quasi-Criminal charges having no more weight or penalty than parking tickets.

The case dragged its way through the Cook County Courts for no less than eight years! During that period the city adopted yet more gun prohibitions that outlawed significant portions of my friend’s collection.

My friend sold his four Marina City Condos along with the single home he owned and moved far from Chicago. Chicago will never benefits from any taxes he’d ever pay again.
Posted by Paul Huebl Crimefile News at 6/03/2008 09:34:00 AM

THe bogus warrants continue ,along with the bullshit confidential informants.In Crook County some judges even deny A Franks hearing, knowing what a disgrace this department has become under Daley.

THe bogus warrants continue ,along with the bullshit confidential informants.In Crook County some judges even deny A Franks hearing, knowing what a disgrace this department has become under Daley.

I remember that warrant! I was a lowly patrolman in a fast district
and it trickled down me/us that the warrant was a setup.
Wasnt it that "flying squad" that did that one, and led by someone who has the same name as the crook cty sheriff?
If this obama takes the white house, that daley(longshanks) will be invincible! God help us......

At any and all costs they grab guns. Headlines rule the day, nothing more.

I too own more than the average number of firearms, and as a copper have to make sure I dot all my i's and cross all my t's. My registrations are submitted on time and I have both hardcopy and electronic records of all my firearms, going back more than the required ten years.

In spite of being in total compliance, people still shake their heads in wonder when they find out I own more than two firearms. "Why do you need them?" "you're nuts" "no one needs more than one"....shit like that I put up with.

I can't wait until the USSC puts Daley and his kind in their place.

Then surely you must of heard about this one. The brother in law of a copper lives on the northwest side of Chicago. He has a summer home in Wisconsin where he keeps several rifles for hunting. He and the little women decide one day that it's time to renovate the summer home so he brings all the guns down to his home in Chicago for storage until the renovations on the summer home are completed. He, after all, didn't want to leave all the guns lying around with the constuction going on and him not being there. Well the Area Two gun team somehow finds out about these guns, fabricates a warrant based upon a snitch who says he was in the guys home and observed a sawed off shotgun and executes a search warrant. They haul the guy off in handcuffs,and take him out to Area Two for processing. Only problem is that when the snitch says he was in the guys home, the guy was in the hospital. The now arrestee hires a lawyer and goes for a Franks hearing which the judge denies. Point of the story is, there is no such thing as justice in the City of Chicago or Crook County. Here we have a law abiding citizen who tries to do the right thing and is turned into a criminal by a Gun Team simply because they do not have the ability to think for themselves. And for those of you that don't know the city, Area two is on the FAR south side while the arrestee lives far northwest. How would they have a snitch who says he was in a guys house on the far northside, especially when the owner of the home was in the hospital?

Wow thats bad, if those are the facts. I would expect those same circumstances to clear an honest PO
who got a beef, but was out of country(etc) when it supposedly happened.
I luv Coppers,except when it comes to the grabbing of honest citizen's guns.
Perhaps a good Private Eye could clear that guy................