McCain vs. Obama and who’s On First 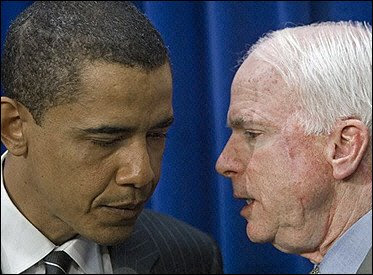 It’s being reported that Obama has a slight lead on McCain. That in no way means Obama is really that popular, but that McCain is still loathed by Conservatives. Obama and McCain’s Senate votes were too often the same.

I’ve complained consistently that there was not one candidate offered up by either party worthy of my vote. The situation went from bad to worse if that was possible.

America is once again being tested with an impending war between Israel and Iran, a monetary crisis aggravated by massive home loan foreclosures and rocketing fuel prices.

We are facing unprecedented inflation and the civil unrest that will result when the poor are deprived of the entitlements they are accustomed to receiving.

Both Obama and McCain are empty suits that will bring this nation more harm than good. Like I said we will be tested.

After 8 years of Barney Fife and no sign of Sheriff Andy surely we don't want Mr McGoo?