Rev. Michael Pfleger And The IRS May Be Meeting Soon 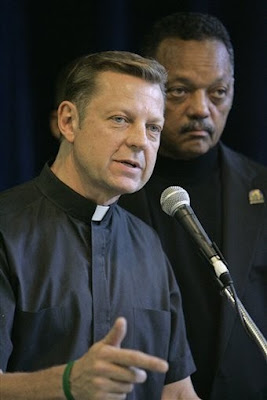 Chicago --Rev Michael Pfleger has his political pulpit at Chicago’s South Side, Roman Catholic, St. Sabina’s Church. Pfleger has been arm in arm and lock-step with Mayor Richard M. Daley and other far Left politicians in the political arena. Pfleger’s agenda seems to be more about saving political candidates rather than the souls of his flock.

When tax exempt religions push political agendas and candidates the pirates at the IRS will simply take away their free ride.

Will Pfleger be killed and become a venerated Catholic martyr? We will just have to wait and see. Somehow I suspect Pfleger will just find himself defrocked and ignored for being the crackpot he is.
Posted by Paul Huebl Crimefile News at 6/01/2008 02:54:00 AM

Cardinal George has "NO BALLS" and he will never get rid of Father Phlem . He's afraid of the congregation at St. Sabina's Church
and how they would react if it happens .