Countdown to the Heller Case-Seven Days. 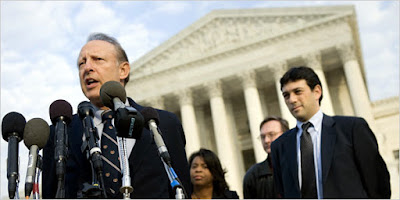 Washington,D.C.--It looks as though I accurately predicted the U.S. Supreme Court would hold Heller for its parting shot, Monday June 23rd.

I have done everything I could to figure out how the court can decide this case. Try as I might I can only come up with is the simple answer. Either there is or is not a right to keep and bear arms. It’s an all or nothing proposition.

Predicting The Supreme Court’s direction is dangerous since all nine members have personal agendas. Far too many of those agendas are not in line with what our founding fathers envisioned.

Can rights be doled out or regulated? The short answer is that rights are rights. Americans that have not lost their rights through due process of law can keep and carry suitable military arms.

What can be regulated is conduct with these arms and that’s already covered by laws against assault, battery and murder.

This may seem like a gun owners, Wish List but it’s not. This is based on the way other Constitutional rights are normally honored by government. Somehow our Second Amendment found itself as an orphan since it was never applied to the states through the 14th Amendment. That’s about to change.

The concept of keeping and bearing arms in America is not something new. That right has just been ignored sometime after 1934. My prediction is that on June 23, 2008 the Second Amendment will be dusted off and returned to a free America.

If Keeping and bearing of arms is a right that means:

1. No more Gun Free Zones will exist in America.
2. No taxes or charges on registration or permits.
3. Permits and Registration must be instantly issued.
4. Gun sales will have no residency requirements.
5. No purchase or transfer waiting periods.
6. No regulation of multiple sales of firearms.
7. Gun Dealers will not be regulated more than any other retail establishment such as one selling alcohol.
8. Barrel length and firing rate will no longer be a concern of government.
9. Proficiency or written testing requirements before possession or carrying of firearms will no longer be required.
10. Any law abiding American will be able to manufacture a firearm and ammunition.

Laws that will survive Heller:

1. Government firearm and or owner registration schemes that don’t deny or delay firearm possession or carrying. (Remember that twice the Supreme Court has held that convicted felon's self-incrimination rights preclude their having to register.)
2. Laws that require majority of age to be reached before purchase or transfer.
3. Laws restricting felon's rights to guns.

The impact of a right to keep and bear arms is that our society will begin to exhibit newfound politeness. Criminals will find that using crime and violence against others will shorten their lifespan. Guns will lose a lot of their glamour and mystique because the common man or woman will be once again able to own and carry them.

I don’t expect that the Supreme Court will use such a broad brush other than to strike down the D.C. Gun Ban. The other issues will come to pass as our local courts litigate pending and new civil or criminal cases using the old and now new law of the land.

Update: The court has at least 20 more opinions due before June 23 including Heller. The court announced they’d meet on Thursday morning which means they will unload some more cases. I still stand on my prediction that Heller will be their parting shot on June 23rd. If anything changes I will have it here first!
Posted by Paul Huebl Crimefile News at 6/16/2008 10:30:00 AM

I live in DC and support the right of all Americans to keep and to bear arms. I pray that the SCOTUS makes the right decision to preserve individual rights.