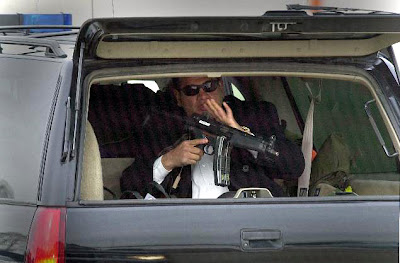 They are expecting a total free-for-all at the August 2008 Democratic National Convention in Denver. We will see firsthand just how the supporters of Mrs. Clinton intend on supporting Barak Obama. I expect an attempted party political coup de'ta on the convention floor. This of course would just be a bunch of really angry women.

I don’t think we’ve begun to see how much fear and hate Obama can generate. So many people I’ve talked to really see Obama as an enemy agent. The threats have never been higher. The Internet is abuzz with more than just criticism for the man who would be President.

I pity the Secret Service agents because as always they will be in the line of fire. I have heard from reliable law enforcement friends that there is already unprecedented tension among the ranks of Obama’s protective detail. They fully expect something ugly to happen any moment.

If anything happens to Obama the racial unrest would make the Rodney King or Martin Luther King riots seem like a tea party. Lets hope people vote with ballots and not bullets.
Posted by Paul Huebl Crimefile News at 6/17/2008 04:38:00 PM

in the picture it looks like a short barreled assault rifle the agent is using. He better stay out of Illinois because they arrest police in Will County who have short barreled rifles.

Barack Obama arrived at the Pearly Gates and St. Peter asked, "Who are you?"
"Why, I'm the President of the United States!"
"Wow," said St. Peter, "a black President. When did that happen?"
"About 20 minutes ago."