The New Sheriff In Town Wants Your Gun… 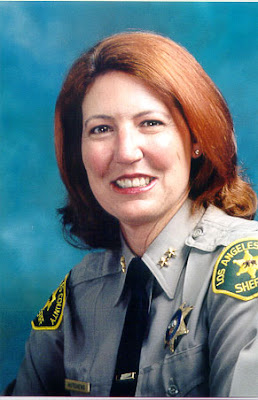 There’s a new Sheriff in Orange County, California and she’s vowed to review the concealed weapon permits issued by her deposed predecessor. Sandra Hutchens says she’ll yank all permits where she does not feel there’s a “good reason” for them.

Hutchens’ old boss L.A. County Sheriff Lee Baca never found a good reason to issue a permit in Los Angeles to anyone other than politicians and government bureaucrats. I expect Hutchens to revoke most of the permits issued and the local stalkers will read in the newspaper just who is no longer protected with a “legal” concealed weapon.

This is where common sense has to step in and civil disobedience needs to take over. The good citizens of Orange County need to ignore the Sheriff’s arbitrary power over their very own life and death. For the sake of the lives of your family simply carry your gun if you feel the need to do so with or without a permit. Don’t let some bimbo decide if your life and that of your family are worthy of protection outside of your home!

The Heller case is FIVE DAYS away from becoming the law of the land. I expect it will rewrite bans against the bearing of arms in the Bolshevik Republic of California.

Citizens of Orange County should tell their new Sheriff to pack her bags and get out of town, by sundown!
Posted by Paul Huebl Crimefile News at 6/18/2008 05:00:00 AM

I carry a gun for self-defense and to protect my two daughters. I don’t need your permission. That’s more than enough good cause.

If you want my gun, come and get it if you dare BITCH! I will be sure to give you the bullets first.

Not shocked considering where she came from (Los Angeles Sheriff) Now she is going to decide if a law abiding citizen has to wait minutes for the cops when seconds count. Something has to be done to make sure she is not given a full term and is allowed to slip back to retirement.

90,000,000 lawful abiding gun owners will resist even harder. That I promise you!

Sounds like shes trying to get a senate seat. Better To Be Judged By 12 Than Buried By Six!!!!

I will never understand why a law enforcement officer, sworn to protect the U.S. Constitution, violates that oath so willingly when it comes to guns.
Hopefully, next Monday we will be rid of all of these laws, which the criminals could care less about, that only seek to disarm law abiding citizens.

Where do these people come from? The spawn of Hitler? OR just a MAyor DAley wanna be ? God Damn every one of these anti American scum.

Unfortunately, I don't think that Heller (assuming it's adjudicated properly) is going to change much of anything in Kalifornia. The anti's will do their best to keep anything from changing.

What do you expect from a woman that never had children but has many cats! She and her second hubby are both retired law-enforcement types that are allowed to carry concealed. After all, they have cats to protect.

According to the Los Angeles Times article her first hubby was her patrol partner with whom she shot up a couple kids and an older man. That cost the County of Los Angeles 1.4 million and an innocent man his life. Of course the LAT made it an example of her being a tough street-wise cop.

The last thing Orange County wants is to become more like Los Angeles County. I think Hutchens knows this but won't admit it. Why else would she live as far away from LA as she could and still be in OC, namely Dana Point?