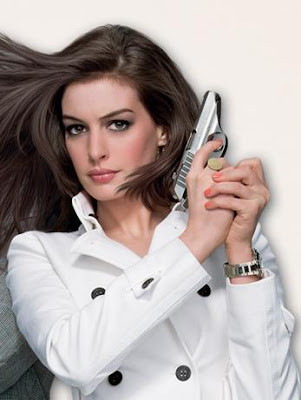 Hollywood—Guns are sexy, powerful and contraband for all except spies, police and the military. Of course we want Hollywood’s sexiest stars to sport them for movie posters. Get Smart star, Anne Hathaway seen here is truly a movie babe with a gun.

The power of guns, especially hand guns is amazing as the movie makers have demonstrated. A single shot kills nearly every time as the victim is blown over a car and sent crashing into a plate glass window. At least that’s what those talented special effects guys repeatedly demonstrate for us.

The truth is the Hollywood’s magic bullets don’t exist and handguns aren’t nearly as effective as most people including gun owners believe. Most gun owners have never been in a shooting or have ever seen anyone shot.

In the films special people, like San Francisco police detective, Dirty Harry Callahan and the Death Wish Vigilante, Paul Kersey seem to do more than their fair share of population control or what some call retroactive abortions.

It’s the guns that are too often the real stars of Hollywood, they are so exotic and flashy like the human stars they are seen in the film with.

Guns have their own star-power; just ask any gun dealers what happens after a hit movie with a gun in a starring role hits the screen.

The real star of Dirty Harry was never Clint Eastwood. Eastwood was chopped liver compared to the Smith & Wesson .44 Magnum. Dirty Harry sold many thousands of Smith & Wesson Model #29s that simply sat on store shelves until, “Make my day” became one of the most parroted movie lines in history.

The best example I can give you of Hollywood’s power to influence lawmakers was how the Broadway play turned into a movie, West Side Story brought us the near total ban of switchblade knives in America in the early 1960s.
Posted by Paul Huebl Crimefile News at 6/19/2008 03:26:00 PM

Yea and I love Hollywood's deep concern for gun safety; finger always on the trigger for those Hollywood types.