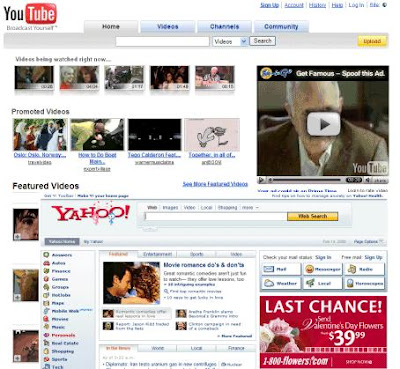 To begin, YouTube owes its life to the pornographers that paved the Information Highway with gold for them. Had there not been a huge market waiting to pay in order to see cyber broadcast displays of affection the technology may have been behind a decade or even two.

YouTube managed to put themselves out front despite shortcomings and stiff competition. The possibilities for this 800-pound gorilla are endless and the next generation is just beginning.

They are unveiling a new higher resolution format to take us out of Data Compression Hell. The new images you’ll be seeing are not the kid stuff of Coke and Mentos fame.

They’ve added a remarkable tracking feature that allows you to see the demographics of your audience and the destination your viewers came from. Of all the videos I’ve uploaded mostly for this blog I was absolutely shocked to learn two of them have a 100% male audience. The obvious question is, what did I do piss the ladies off?

Getting your video featured by YouTube is like winning the lottery. A really entertaining video may never get the attention it deserves and some pathetic juvenile offering will get a gazillion hits. There are just too many videos for anyone to really look for the good stuff to feature at Youtube. The only answer here is using good TAG words to bring in people using search terms.

Copyright infringement if a giant buzz word right now and the subject of a mountain of litigation. The copyright holders are finally realizing that their protected products that have been pirated have actually generated new and unexpected revenue! It’s not YouTube but their users who brought new life to performances long forgotten and new money for the victims of the infringement.

I have talked to two performers who are somewhat retired today about this phenomena. Neither star owns the rights to what was posted on Youtube. They both told me they were really happy to see their fans had done this and has sparked new interest and sales of material they created decades before YouTube ever existed.

YouTube has opened the YouTube Screening Room to serious film makers. They will be showing four new films every week. Aside from sharing revenue I would not be surprised to see YouTube providing needed capital to their own proven box office winners.
Posted by Paul Huebl Crimefile News at 6/22/2008 09:24:00 AM