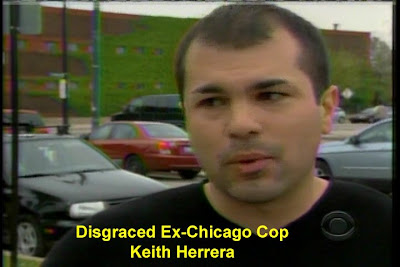 Is Keith Herrera a liar or just a snitch trying to save his skin by telling the feds what they wanted to hear? Additionally the alleged ringleader, Jerome Finnegan has also cut a deal with the feds. Can Herrera and Finnegan be trusted to tell the truth? I don’t think so since their testimony is being bought by something far more valuable then gold, their freedom.

At stake are the very lives of their own brothers and teammates. Many of these officers may never live to see freedom again. Their families will be left in a shambles.

This 60 Minutes broadcast was more about a public relations publicity stunt between a Mayor and his new Superintendent of Police who is pulling strings at the Justice Department.

Herrera would never be able to talk to the media without total approval from the U.S. Attorney’s Office. As for me, I smell some real rats.

Sounds like a pack of rats, and a complex set of motives from each of the players. Sorting this all out is going to be real hard, perhaps more so than can be done. I'd like to see 100% disclosure and the right sentences for the various crimes but that probably isn't going to happen.
So I'll hope that *most* of the "bad guys" get caught and put out of action, and the rest of them tone down their actions.
Yeah, it's a nasty world and "integrity" is a hard, and sometimes deadly, quality to have.

i've never had a boss tell me to use creative writing in order to cover up my partners and i stealing 30,000 dollars. they have never told me to lie once.

WTF ! This kid says he is still the police but without a gun & star. Yea right . I hope he learns how to TOSS the SALAD .I'm sure that some big old lifer will teach him fast. This kid is NO GOOD , as were the others . They all deserve to rot in the pen. Now they're all trying to save their asses . Guess what guys, your all going to the joint for a long , long time.

Another typical Fed Case. They are going to make deals with the two main offenders to burn others with the least amount of culpability. Finnegan and Herrera will tell the Feds whatever they want to hear to save their own butts. Great job.