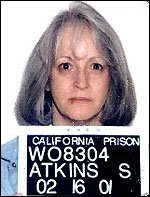 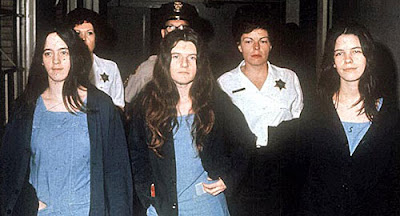 Corona, CA--God and perhaps the devil are the only ones that will ever know what led several young and privileged women to become mesmerized by a little man who would shock the entire world with a cruel murder spree in 1969. The women involved destroyed their own precious lives after they made the choice to follow Charles Manson straight into Hell.

The most notorious act in the Manson Family terror campaign was the bloody massacre in Benedict Canyon that slaughtered the pregnant, young and beautiful film star, Sharon Tate and six others.

Many will argue they should have all been executed as their trial court had ordered. I say that death would have been a gift over spending nearly 40 years in a California prison. I'm convinced that life in prison is much worse than death.

Susan Atkins now 60 years-old, eventually renounced Manson and became a law-abiding prison inmate. She and the other Manson girls have unsuccessfully sought parole ever since they were eligible to do so. For Atkins, her impending death is about to free her.

Adkins has cancer. The disease led to the amputation of her leg and she’s been suffering from terminal brain cancer and other related problems. Adkins is not expected to live more than five months.

The California Department of Corrections and Rehabilitation is considering Adkins release since she’s virtually helpless and hopeless. It’s a safe bet that Adkins poses no danger to the community.

We wonder what fate awaits a soul that viciously shattered families and cruelly murdered innocent people. Susan Adkins will find out very soon as she prepares to meet her maker.
Posted by Paul Huebl Crimefile News at 6/13/2008 07:11:00 AM

In America we have an appeal process and death penalty appeals cost taxpayer 10 to 40 time more than keeping an inmate behind bars for life. Appeals take decades and taxpayers have to pay for both the prosecution and defense.