Moe The Chimp Is On The Lam! 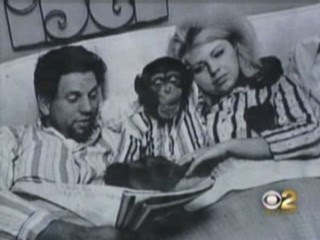 DEVORE, CA—Orphaned when poachers killed his mother Moe was adopted by humans as a child. Moe was raised by his proud parents, St. James and LaDonna Davis of West Covina. Little Moe had a great life until government got involved. Moe was ordered by a court to serve hard time at the critter sanctuary.

This became an even more dreadful tale because what happened when Moe's mom and dad went to visit Moe in 2005. Some other jealous and angry chimps in the facility escaped their enclosure and horrifically Mauled St. James Davis’ face and genitals.

Yesterday Moe planned and executed a daring jailbreak and is now the subject of an, "All Points Bulletin." Animal control officers and police aided with helicopters are looking for this wrongly incarcerated and heartbroken fugitive critter. Poor little Moe missed the only parents he ever knew. Moe’ future is bleak because he never learned normal survival skills otherwise I’d cheer and yell, “Run Moe run!”
Posted by Paul Huebl Crimefile News at 6/30/2008 09:38:00 AM

Maybe Moe will come over here to AZ. As long as he stays clear of Sheriff Arpaio's deputies, he'll be as safe as all the other "illegals".
Heck, he can even get a job at MacDonalds: the one at Thunderbird and 7th Street already has lots of monkees. No English required!