Obama Self Exposed As A True Socialist 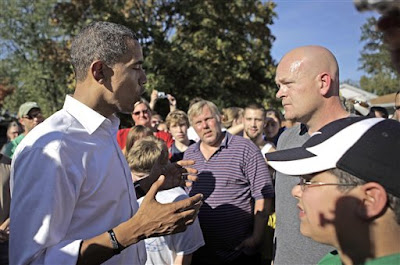 This was not about “Joe The Plumber” or the question put to Barack Obama about his tax increase plans. It was Obama’s candid answer that he plans to redistribute the wealth. That’s exactly what Karl Marx was all about. That’s un-American and that form of government has taken us to wars in order to prevent that from happening here.

In America we have created checks and balances to prevent a singular viewpoint to rule everyone in this diverse country. With Obama added to Pelosi and Reid as our absolute authority the checks and balances will vanish. The political bloodletting to follow will be painful and prove to be a derisive as any time ever in our country.

Our already deeply troubled economy will lose investors and our prolific productivity will end. Obama would be a disaster at this time in our nation. Marshal Law and the suspension of habeas corpus won’t be far behind. We may be in for some serious population control like we had in the 1860s in America.

Obama is the confessed cocaine using Socialist with minimal experience as a leader and no history of even minimal military service. Obama is the friend of terrorists, racists and people with the mindset to destroy our economy and way of life. Obama is dangerous for America.
Posted by Paul Huebl Crimefile News at 10/18/2008 08:48:00 PM

Look at what Obamas secret serve detail did to Jessica Hughes in TX.
http://freezethefascism.blogtownhall.com/2008/10/17/secret_service_intimidates_private_citizen_for_obama_updated.thtml

YOU HIT THE NAIL ON THE HEAD! HE'S IS A SOCIALIST AND A VERY DANGEROUS ONE. C'MON FOLKS LETS ALL WISE UP TO THIS OBOMA CREEP.. VOTE MC CAIN IN THE LEAST WE KNOW FOR SURE THAT HE'S AN AMERICAN WHO HAS GIVEN SO MUCH TO THE USA AND HAS FOUGHT FOR OUR USA. ALL OBOMA HAS DONE WAS "TAKE" IN THE FORM OF A IVEY LEAGUE EDUCATION PAID FOR BY AMERICAN TAX PAYERS. A VOTE FOR OBOMA IS A VTE TO GIVE OUR HARD EARNED MONEY TO THOSE OF HIS RACE WHO REFUSE TO WORK AND THE LIKE. ENOUGH ALREADY!!! JUST CALL ME ANGRY JOE THE TAXPAYER WHO IS HUMPBACK FROM CARRYING THE OBOMA;S OF OUR COUNTRY. ENOUGH!! VOTE MCCAIN & PALIN - TRUE AMERICAN'S WITH OUR INTERESTS AT HEART..

Remember the Joe the plumber is just an average guy like you and I.

FORWARD TO ALL YOU CAN

Why is all of this going unnoticed by the media???? They send 1000 reporters to Alaska to dig up something on Sarah palin and they have this right in front of their eyes!


From Dreams of My Father:'I ceased to advertise my mother's race at the age of 12 or 13, when I began to suspect that by doing so I was ingratiating myself to whites.'

From Dreams of My Father : 'I found a solace in nursing a pervasive sense of grievance and animosity against my mother's race.'

From Dreams of My Father:'There was something about him that made me wary, a little too sure of himself, maybe. And white.'

From Dreams of My Father: 'It remained necessary to prove which side you were on, to show your loyalty to the black masses, to strike out and name names.'

From Dreams of My Father:'I never emulate white men and brown men whose fates didn't speak to my own. It was into my father's image, the black man, son of Africa , that I'd packed all the attributes I sought in myself , the attributes of Martin and Malcolm, DuBois and Mandela.'

And FINALLY the Most Damning one of ALL of them!!!

From Audacity of Hope:'I will stand with the Muslims should the political winds shift in an ugly direction.'

* If you have never forwarded an e-mail, now is the time to Do so!!! We CANNOT have someone with this type of mentality running our GREAT nation!! I don't care whether you a Democrat or a Conservative. We CANNOT turn ourselves over to this type of character in a President. PLEASE help spread the word