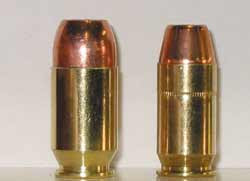 Chicago, IL—Right now, police are painstakingly investigating the murders of Academy Award actress and American Idol, Jennifer Hudson’s mother and brother. They are also conducting a grim search for the only known witness, seven year-old Julian King. Police may get help from evidence only the killer could have left at the crime scene.

Chicago police are hoping that the killer’s skin cells and sweat were deposited on the shell casings from the murder weapon.

Ammunition must be first loaded into spring fed magazines before semi-automatic pistols can be fired. Sweaty fingers must make contact with the cartridge cases and sometimes minuscule biological material can be found trapped in the rim areas of the shell casings.

DNA sampling may well lead police to the killer. Obviously the police must be able to find the killers DNA profile from a database or by taking a sample from a suspect. Testing like this takes weeks at a minimum.
Posted by Paul Huebl Crimefile News at 10/25/2008 03:46:00 PM