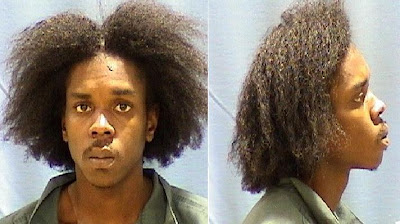 Joliet, IL—William “Flex” Balfour is inside one of America’s toughest prisons, Stateville. The population of this infamous Big House is mean and Black. Balfour is there on a parole violation and is entitled to the presumption of innocence.

The problem is that American Idol and Oscar Winning actress, Jennifer Hudson’s picture hangs in many cells there. I know that people suspected of killing children don’t normally do well in prison. I also know that the presumption of a child killing suspect’s innocence does not have much meaning to the nastiest inmates at stateville.

Balfour would not last ten minutes in any kind of group setting without catching the business end of a shank, garrote or other exotic improvised prison weapon.

Here is William “Flex” Balfour latest mug shot taken this morning and in it he does not look unconcerned.
Posted by Paul Huebl Crimefile News at 10/27/2008 01:14:00 PM

This monster deserves whatever he gets in jail. America will be a better place with his kind gone.

I went on a tour of Stateville back in the late 70's as part of Illinois State Police Academy training. We went through "B House", which was, at the time, the place where the worst offenders were housed. The place had a sickening odor of sweat, fear and male ejaculate that could make you sick to your stomach. Some of the inmates threw urine and fecal matter at our group as we passed their cells. We were also warned not to eat the mashed potatoes in the cafeteria, as they would probably be laced with human DNA material, if you know what I mean. The place is full of animals and I think William “Flex” Balfour will fit right in, if he survives. I'm hoping he doesn't.