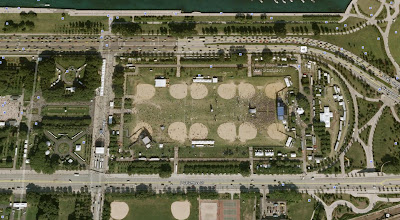 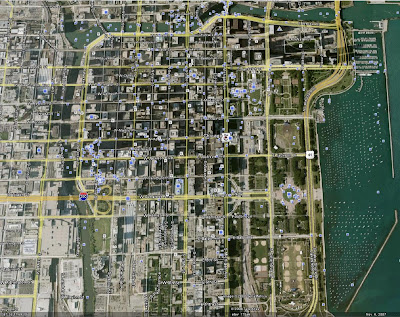 Click on photos to enlarge. Grant Park is at the lower right.

Chicago, IL.—At least some city officials have grave concerns about the plans for a huge celebration for Barack Obama at Chicago’s Grant Park. All the tickets for the event have been given out and Mayor Richard M. Daley gleefully invited "a million people" to come down and celebrate.

The biggest problem is a mathematical one. The 5000 or so police officers will be gravely outnumbered and placed in danger. There is no way to keep out thousands of armed street gang members or protect the thousands of businesses. The cops will be way out manned and outgunned. Police cannot use deadly force against looters because of a 1967 Illinois law.

Some officers I talked with are expecting to become targets of the unprecedented mob that will descend into the area. Once the mob gets control of the outdoor lighting any hope of security will be lost for sure.

There would be no way to protect the Loop. How much priceless art will be lost at the Art Institute? Will the brand New CBS broadcast Center be destroyed? I know a lot of cops that would look the other way as that place is looted and trashed.

The numerous buildings of every government level that house sensitive records will be in jeopardy. Imagine gang members getting into Daley Center court offices and destroying the records associated with pending trials.

The only good idea officials seem to have is to open the bridges along the Chicago River keeping mobs from spreading to the Gold Coast. The Chicago River is a great barrier and that will control mobs moving Northbound.

It’s too late to stop what Barack Obama and his energetic supporter Richard M. Daley has set in motion. The Genie is out of the bottle.
Posted by Paul Huebl Crimefile News at 10/31/2008 06:33:00 PM

Paul,
Take a look at what he left is saying, this shit gets sacrier by the second:

AP is picking the "Obama Riots" up now:
http://ap.google.com/article/ALeqM5gF3nW7Y1peea6l0EHae1MyDR2r6QD945OT6G3

This may prove to be the most violent event ever in Chicago's history.

Gangs will unite to rape, murder and deatroy. Cops will be powerless to stop them.

What a dumb ass mayor!

It will be very entertaing as thugs take over live TV broadcasters and begin their own broadcasts from Grant Park.

They will tell the TV crews to keep them live on air or die!

Lets hope the boys in blue keep the city and themselves safe.

Whether any of these scenarios play out remains to be seen. The Crowds should be joyful not Hateful, While gangs are always an issue, they could also be facing thousands more people who would gladly assist the cops in beheading these gang mambers and there related insurrections. Too many folks always want to see the worst, and forsee the terrible image of thousands of Chicagoans and People all over the US joyfully dancing in the street because George Bush and Darth Vader are no longer in control of OUR Governement, Spending us into Oblivion and running up a trillion dollars of National Debt, No I think Ill be celebrating a return to a real people person, not some Rich guy who could care less if we all starve, he will be working for Halliburton or KBR or Bechtel its almost assured. So as People if we see Gangs decending on Downtown, Im going to fight them and take my city back, Maybe its time we the people got rid of 2 scourges, Gangs and George Bush

going to be a rumble in the jungle

Obama and Daley are gambling with the lives of the cops and the people they invited to this celebration/orgy/riot that will only cause death and destruction.