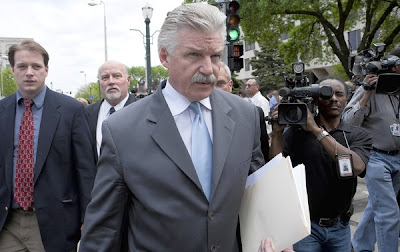 Joliet, IL—How many lives will James Glasgow ruin before he’s removed from office? Glasgow never met a TV camera he didn’t love. He never missed a chance to rush to judgment and destroy lives on the flimsiest of evidence.

Prosecutors in America can indict a ham sandwich with ease. Prosecutors have a two-fold duty, prosecution of the guilty and to seek justice. Too many like James Glasgow have redefined their mission to grabbing and prosecuting the nearest human and to generate as many self-serving press releases as possible.

That’s always great TV for the Nancy disGrace show on CNN. The Internet becomes filled with hate for the accused as the jury pool is tampered through modern technology like never before in history. Getting a fair trial anymore is nearly an impossible challenge.

Will County State’s Attorney, James Glasgow did some serious damage to Lynwood, IL police officer Brian Dorian and his family. Investigators invaded Dorian’s privacy by grabbing his cell phone records and computer data that with other evidence placed the cop far away from the murder.

Search warrants were served on Dorian’s home and vehicle as investigators went through every intimate aspect of his private life. His firearms were seized, along with clothing, computers and storage devices. It may be months yet before everything is returned.

I can’t imagine what the damage done to Dorian is worth. Prosecutors enjoy immunity and generally can get away with this stuff on a regular basis.

Glasgow can be expected to say the system worked and justice was done. Justice won’t be done until Dorian is compensated and Glasgow is removed by the voters. For Brian Dorian the system did not work and he needs somehow put his life back together.
Posted by Paul Huebl Crimefile News at 10/12/2010 07:09:00 PM

Time to call it a day or end of a career!

He, Glasgow, is already putting the spin on it. He stated in his press conference (I'm paraphrasing cause I saw it on the 9pm news and don't have the actual quote) that the Lynwood Officer would have done the same thing if it was him investigating the case.

Glasgow truly needs to go. Maybe even charged with prosecutorial misconduct for the way he has handled many of the high profile cases that have happened in Will County.

There is no excuse for charging someone without first checking out their alibi. No excuse. There is one more person being held in Will County Jail even though there is no evidence against them, Drew Peterson. Glasgow is asking the state appellate court to allow him to use hearsay evidence that a judge has declared is unreliable agaisnt Drew. Glasgow is trying to put a man in jail for life based on unreliable hearsay. Will County voters wake up!

They also leaked extensively that the cop was involved in a fatal car crash a few years back. But nowhere did they mention that the other driver involved blew a stop sign.

Glasgow is a media whore who will do anything to get his mug on TV. Bad news for anyone caught in his net, innocent or not.

I really feel he arrests first and tries to find the evidence later. Meanwhile he's destroyed a person's life. There really should be some accountability to elected officials. If we are a hired individual- we would have been fired on the spot for that-yet he continues to make horrible erros.

I just saw this article (way late) because I'm trying to figure out how to get my cousin out of jail. There's no evidence against him!!! James Glasgow and his office are corrupt criminals who should go to jail and get the crap kicked out of them everyday!!!

I just saw this article (way late) because I'm trying to figure out how to get my cousin out of jail. There's no evidence against him!!! James Glasgow and his office are corrupt criminals who should go to jail and get the crap kicked out of them everyday!!!

Glasgow is so arrogant. People of Will county need to wake up. Even now in 2016. Wish the hit Peterson put out on him went thru.

Did anyone else notice that James Glasgow has been involved in at least 3 murder for hire dramas? I'm sure there's more, but these are the 3 at the top of my head.

Keith Smith, (Glasgow had an inmate in the county jail try to set up another inmate. Caught a Sheriff's deputy instead.), Bob Goldsmith, and Drew Peterson. All the judges, state's attorneys, public defenders, and scumbags in that courthouse belong in prison.

In this month Glasgow is going to be fired, arrested by Illinois state police, investigated by Illinois attorney General and US attorney General, tried, and spend very long time in prison with no retirement. Glasgow committed frauds under the penalty of perjury on the people of the state of Illinois, the Governor of Illinois, the people of the state of New York, the Governor of the state of New York,the rest of the people of the USA, and on President Obama too. Also involved with Glasgow are Will County judges, state attorneys, public defenders, and the Clerk of the court too. Glasgow is going to be bankrupt. Glasgow might even committ sucide if he has any dignity. Tame my word for it. For more info please Text me on 708 608-0706.