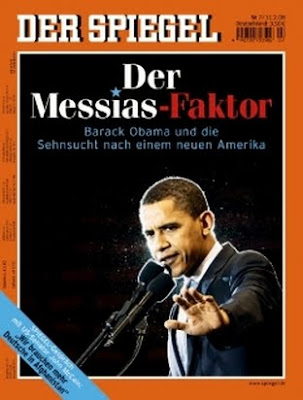 Germany--Der Spiegel Magazine is a popular publication for the German speaking world. Because of the ease of Internet publishing they also offer Der Speigel Online International in English. Der Spiegel is uncomfortably Left of the political center but well written and informative.

Most of Germany’s Liberals love Barack Obama and are disappointed that he’s not caught fire as the Socialist Messiah of the world. The writer of the Der Spiegel article, Klaus Brinkbäumer gives us his version the political climate surrounding our mid-term elections.

The article laments the “vitriol and hatemongering” of the Tea Party movement and other Conservatives. Brinkbäumer seems to compare Sarah Palin and Fox News commentator, Glen Beck to Adolph Hitler’s own National Socialism pre-holocaust intolerance campaign. Brinkbäumer thinks that it is unfair to suggest that Obama’s agenda mirrors that of Hitler and Stalin.

What Brinkbäumer totally misses is that Obama’s entire platform is right out of Karl Marx’s Das Kapital and the Socialist ideas of Mein Kamph. Obama has gone on the attack against the very foundation of America’s Constitution, free market and liberty.

I guess Brinkbäumer offended me the most by suggesting that Obama’s opponents are gun freaks. No Mr. Brinkbäumer, we are not gun freaks but lovers of freedom, liberty and the security of knowing we can protect ourselves from criminals and even Socialists. Mr. Brinkbäumer needs to remember that Stalin, Hitler and Obama share the exact same view of Gun Control. No politician can enjoy absolute power over a well-armed population.

Adolph Hitler was a wildly popular man in Germany. Hitler preyed on a desperate population starving in a wrecked economy with promises of Hope and Change. Hitler redundantly lied to his fellow countrymen and before he was defeated caused the deaths of 6 million Jews and 9 million good Germans. Hitler was a true Socialist. There was not a dimes worth if difference between Stalin and Hitler. Barack Obama is also a true Socialist.

Mr. Brinkbäumer needs to be aware that America has a safety net to prevent people like Stalin, Hitler and Obama from changing America to a Socialist nation with a simple majority. That safety net is the Constitution and that can only be amended with a two thirds majority.

I must give credit for Brinkbäumer’s recognizing that Obama has delivered nothing to the African-Americans and Homosexuals that supported him. Of course the correspondent won’t suggest the reality that these are the very people Obama wants to enslave with Socialism.
Brinkbäumer never noticed that Obama has extended and strengthened the hated Patriot Act and has sought to ease restrictions for electronic spying on Americans. Obama has not once suggested the death penalty should be abolished. True Socialists cannot survive without the liberal application of the death penalty.
Mr. Brinkbäumer obviously loved Obama and has delivered his political obituary from the point of a disappointed Socialist. He further suggests that Obama came up short only because of needed more control over the government to make his dreams come true. What Obama lacked Mr. Brinkbäumer is exactly what Adolph Hitler and Josef Stalin had, and that was absolute power.