The name Obama means you can get away with crimes! 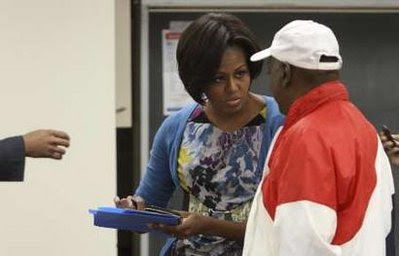 Chicago, IL—In an absolute arrogant display of lawlessness, First Lady, Michell Obama knowingly violated the Illinois electioneering, criminal statute. Obama did it aggressively and blatantly and in front of local media. So far she was neither questioned, nor detained by police.

Obama is extensively experienced in election law and was an Illinois lawyer until her name was taken off the rolls of licensed attorneys the Illinois State Bar. Any suggestion of ignorance of the law is beyond silly. In addition polling places have warning signs at the door about the prohibition in addition. There is absolutely no excuse for Obama’s crime and Cook County State's Attorney State’s Attorney. Anita Alvarez has the sworn duty to prosecute all violations.

Obama must be arrested or properly summoned to appear, be fingerprinted and photographed by police. She must also appear in court and defend or plead guilty.

I don’t expect that the punishment for this crime would ever include jail time considering Obama may have no prior criminal history. This is a misdemeanor under which a person could be sentenced up to 364 day behind bars. Obama must get no less or more punishment than many others who were arrested for this common violation.

In Chicago many people have been arrested and convicted for simply wearing a political campaign button into a polling place.

We can accurately predict that Michelle Obama will enjoy immunity because of the obstruction of justice and official misconduct of staunch Obama supporter and fellow Democrat, Cook County State’s Attorney, Anita Alvarez.

I'm confused, Paul. What did she do?

She campaigned inside a polling place during voting. That is a crime in every state.

Can she cast a vote in Washington? Or did she already vote in chicago?

who watches the watchers???

She was surrounded by democrats, what could we expect?

What's going on with Rahm Emanuel? I read one article claiming Michele told Rahm that he is no longer welcome at the White House (unknown reasons) and that the run for the mayor's seat is merely a smokescreen. Several other jews are also bailing.

Something definitely is awry.

Obama was the only major presidential candidate in many decades to refuse to release his college transcripts and other documents. Now, even as president he still refuses to release any personal documents. Even his college thesis paper on the Soviet Union is under lock and key.

No one has the balls to make a Citizen's arrest!