The Political Correctness Police are at it Again. 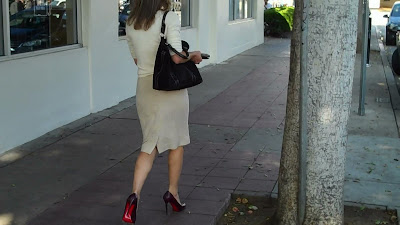 New York, NY—With all the burning issues for the City Council here they seem to have way too much time on their hands. They are struggling with the issue of outlawing the Wolf-Whistle in the city’s streets directed to the fair sex.

It is an absolute right for women to take the extra time to display their elegance and femininity in America. Beautiful young women walk down our streets with their high heels striking the pavement in a practiced staccato is something I equate to a primitive mating call. I live for that sight and sound.

They dress to impress and deserve all the admiring glances they can get. Every now and then there is a wolf-whistle or two to let the lady know her extra effort to look great is appreciated. Usually well-adjusted women will turn and smile for the compliment.

I certainly don’t want to see these terrific gals frightened, harassed, followed or insulted. Most or all of the conduct I just described may well violate existing laws that should be enforced. But to outlaw the wolf-whistle is plain un-American.

To even suggest that a complimentary wolf-whistle should result in an arrest and a criminal record is insane. My question is, has Taliban madmen taken over New York’s government?

Just so you know the wolf whistle in the video below is only a sound effect added post production.

Paul you know it is not just the wolf whistles.

if we are not living in it already - with over regulation, double standards,

and let's not forget extraordinary rendition and legalizing Torture.

Not Box Cutters - Boxed In.

Looks like the babe in the video decided to jaywalk after feeling your leering eyes on her butt as you filmed with your mini-digicam. She couldn't get away fast enough. Haha

Any woman wearing those $400.00 plus Christian Louboutin, flashy red soled high-high heels is rightly proud and wants to be seen.

She got her money’s worth and I’m sure she has a lucky boyfriend, husband or both. That lady definitely walks with authority!

How many of you boys played the video more than once in kind of a YouTube double take? :)

most of these Women secretly Love this kind of b.s. They are so vain, that they just LIVE to noticed, and their looks are their main reason for existing. Why does anyone think they dress like they do and walk out in Public? This is nothhing more than Political Correctness, again, and if the shoe were on the other foot, and women were whistling at men, and the men complained, of course, Nothing would be done. All B-S..

We have to control the wolf whistles, but that commie whore Behar can call another gal a bitch because she disagrees with her, fair I thing not.

I want a pair of those shoes, Paul!

I think I was hypnotized watching her walk with those bright red soles. They have some kind of magic indeed.

"How many of you boys played the video more than once in kind of a YouTube double take? :)"

I dunno. I thought she had a big butt and walked like a duck. But that's just me.

That gal I spotted in Westwood by UCLA is no duck! Her butt looks terrific! She rocks!

She has given attention to details in order to look great. I know my video of her will make her an international star.

If anyone knows her, please give her my telephone number! :)