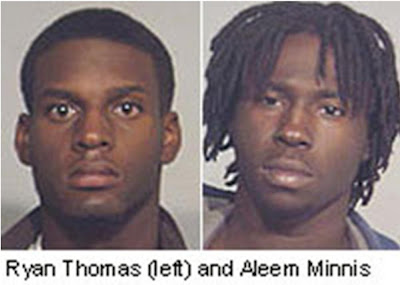 Chicago, IL—Saturday’s night life in the Gold Coast area is always fun. Educated, well-heeled and attractive young people can meet, dine, dance and delight each other with their youth.

It’s been a relatively safe area but that’s changed. Roving bands of mobile African-America thugs are preying on people in the neighborhood at an alarming rate. Usually the creeps successfully rob, beat and even sexually abuse young couples out for a good time. The thugs always escape into the night with cash, jewelry, Ipods, cell phones and credit cards belonging to their victims.

The thugs carry all the weapons they wish knowing their law-abiding and peaceful victims will never violate those weapons bans. It’s a formula for success created and maintained by Chicago’s politicians for the thugs.

Last night for one group of thugs, luck was not on their side. At half past ten, four armed robbers forced their way into a car at gunpoint at State and Ohio Streets. They took the victim’s cash and an I-phone and then fled.

Alert 18th District officers somehow quickly found and pinched the four thugs. Two adults and two juveniles all from Chicago’s distant South side were apprehended. Aleem Minnis and Ryan Thomas, both 18 will be brought before a judge for setting bail and assigning taxpayer funded defense lawyers.

The two unidentified juveniles will get lots of love and understanding from the juvenile court; instead of punishment they deserve as they’re quickly set lose to continue their life of violent crime.

In reality the two 18 year-old thugs will get low bail they will not be able to post. After just a few months, they will enter plea agreements for probation and time served and will hit the streets and be even more violent. Their victim was White along with the cops, lawyers and judge. They will blame racism by Whites for their inconvenience and take it out in spades on their next White victims.
Posted by Paul Huebl Crimefile News at 10/10/2010 09:11:00 AM

State street is not such a great street these days - it's more like Scum street in fact.

Great column Paul! Knowing the area like you do, your readers can trust your take on it all. I'm sending it to my son who is in Chicago attending college and I KNOW he loves the near north/gold coast area to hang out in and relax. Everyone should not let their guard down. These bums are watching our good kids and just waiting to sneak up on them armed. Thanks for the alert! Old Copper.

You missed one thing, Paul. The "victims" in these cases almost always turn out to be liberal YT's who are unlikely to press charges and the first ones to scream brutality when the po-po struggles to get the cuffs on the shitheads.

They get what they deserve.

They will blame racism by Whites for their inconvenience and take it out in spades on their next White victims.

You hit another grand slam Paul!

Right on the money!

hopefully I'll get to try out my new Taurus Public defender .45/.410 revolver on one of these stickup type goons real soon. Looking forward to seeing how a faceful of .410 shotgun pellets turn their faces into hamburger.

Too bad the senior citizen couple, that got viciously attacked by members of an African-American funeral procession after a car accident on 31st and Kedzie, were not armed and able to defend themselves. Even with Cook County Sheriff's present on scene, these animals kept beating on the senior citizens and put them in the Emergency Room at Mt. Sinai Hospital. And of course, there was no mention of this incident on any of the media outlets in Chicago. I guess an old couple getting brutally beaten by a mob of thugs is not important in Chicago, unless the victims were African-American themselves.

Me and my husband were held up by gunpoint on Oct 30 @8:50 pm, the thug said give me your cash or I'll shoot you, we ran, however I did turn around and he was getting ready to shot I ran and threw my purse to divert him. A young couple found my purse intact and returned it the following motning. Maybe we shockef him by running , I'm not sure but we were very lucky.
Stay alert.