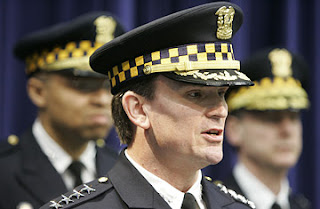 Chicago, IL—Mayor Daley’s appointee to the position of police superintendent, Jody "J-Fled" Weis was an utter disaster for public safety in Chicago. The former FBI agent with an inflated salary and ego never belonged in that position. Weis has accomplished nothing except the alienation of officers already demoralized, depressed, outgunned, and undermanned along with being underpaid.

Despite his wearing the coveted Chicago police uniform, Weis has never been a cop and is nothing more than a lap dog for the corrupt reverends and politicians in control of the city. Weis’ attempt at spinning crime statistics and Chicago’s bloody summers into some illusion of public safety progress has been an abject failure.

It’s very simple Chicagoan’s tax dollars have been distributed to criminals and political whores as the police department has been run into the ground with deprivation. The manpower shortages have resulted in surrendering the streets to emboldened thugs. The police are simply sent in to clean the brains of the victims off the streets and generate meaningless paper reports.

Thugs will never be deterred through negotiation and kind words. As Al Capone once said, “You can get a lot more with a kind word and a gun, than a kind word alone.” The Chicago Police Department has lost any relevance and or meaningful concern to Chicago’s street thugs.

Weis actually made a shameful public display of cowardice when during a live CBS2 interview, shots rang out and Weis said. “Sorry, I gotta run!” as he disappeared from the scene. Any real cop would have seen to the news crew’s safety, and responded to the scene with gun in hand until enough officers were present. This was no simple case of shots being fired but an actual homicide that remains unsolved today.

Weis said he leave the department if he did not have the support of the rank and file cops. A morale survey of cops was completed and the results were quickly locked in a vault never to see the light of day. Hundreds of cops have demanded the resignation of Weis as they publically demonstrated in an unprecedented action that was downright humiliating. Weis has only dug his heels in deeper.

Weis is now exacting revenge as he smears all Chicago cops with non-newsworthy press conferences. Weis has twice alerted the news media to cover “important” press conferences. First he announced a sergeant has been stripped of his gun and powers because he’s under investigation. Weis refused to name him which guaranteed yet another press conference for that revelation. On Monday Weis did it again revealing that six more officers were stripped and sent to the call-back Gulag, again revealing no names. Now he can hold two more press conferences, one to name them and another to reveal the allegations.

Weis is making sure that the accused officers can never get a fair hearing by tainting public opinion. Certainly Weis could have made a single announcement of the ongoing investigation of allegations. Instead Weis has deliberately and clumsily turned this story into a salacious soap opera.

Frankly, Jody Weis is truly despicable and every Chicago police officer should simply turn their backs on this despot whenever they are in his presence.

Here is the famous “I gotta run” clip.

Weis is a COWARD and we in the rank and file of the Chicago Police Dept. demand that he be fired! He does NOT have the support of the department men and women and he should resign as he promised he would. It's obvious revenge on his part that he is going about taking real cops guns and authority away from them while he grand-stands for the media! He is violating these offers right to a FAIR jury. What a nerve he has! Weis is just another empty holster weightlifter who should be arrested himself for impersonating a Chicago Police Officer. How dare he! FBI folks are nothing more than paper shufflers - they let the real City Cops make the arrest then they walk in with their paper and take the prisoner AFTER he is in handcuffs...Chickenshits I say..

Don't forget the idiots that assisted in ringing out his reign of terror on the working policemen and women of the CPD. They enjoyed a nice ride on your backs.

Hopefully, what goes around, comes around.

Paul , I could probably go on for the next hour on what I thought about J-Fled .But it would take longer and you would probably Bleep the shit out of me . There are NO words to express how I feel about this POS . Everytime time that I see him I want to vomit . I just can't take him anymore . Can't he just quit and end all this bullshit that he spews .