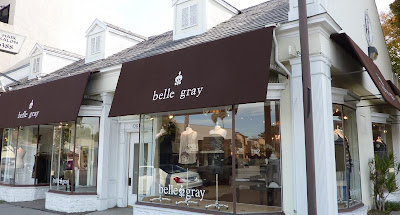 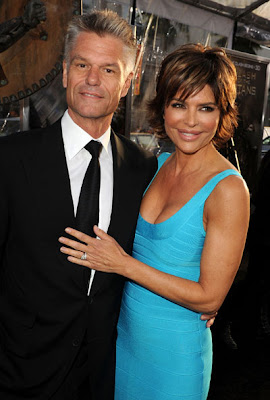 Sherman Oaks, CA—On fashionable Ventura Blvd. there are countless little boutiques for the kind of elegant women that really ring my bell.

If you need a simple pair of flip-flops they can be had for a mere $25.00. A very sexy pair of black leather boots will set you back nearly $500.00 and that simple black dress can be yours for $450.00. I’m sure that these prices are attractive for women in the area. One place that can make any average woman look elegant is, Belle Gray by Lisa Rinna.

The owners of this place to throw a little extra money around are Lisa Rinna and Harry Hamlin. In the past they both had great shows and the income to match. Aging in Hollywood is unforgivable when it comes to careers, especially for women. TV actors have been pushed aside by the scores for the reality television garbage that insults our intelligence.

Over the years we’ve seen Lisa’s already plush lips swell beyond belief. I can only assume the plastic surgeons have earned a nice reward for growing Lisa’s supple pucker. Somehow I think Hollywood’s producers found Lisa’s lips were too distracting and that’s limited her opportunities.

I respect the craft of these actors who have struggled in a very tough place. I also know that the economy and entertainment changes have not been kind to either their careers or boutique. I’ve watched Ventura Blvd lose a lot of popular businesses in the last two years. There have been too many foreclosures, bankruptcies and broken hearts everywhere. People do what they must to survive.

Apparently Hamlin and Rinna have a new reality series they were promoting on a national morning talk/news show. During a live national broadcast with the happy couple, a phone call revealed a burglary at Belle Gray. The horror of it all! Google searches on the couple and Bell Gray were even well beyond a publicity agent’s wet dream come true. The gift of spontaneous tongues wagging suddenly sent their names into the stratosphere. In case you forgot who Rinna and Hamlin were, you remember now!

In the last few days, I’m sure there was no shortage of visitors to Belle Gray and business was booming.

Okay, I’m not buying it. Rinna and Hamlin had motive, means and opportunity to pull this inside job. Last night the publicity went into full reload with another burglary! This time with shadowy, film noir style surveillance video of a supposed burglar!

With a little Hollywood makeup anyone can be made unrecognizable even to their own mothers. I don’t buy this caper either especially when they let TV news cameras inside their store.

Is there really a lucrative fencing market for elegant women’s clothing that is sizzling hot?

Hamlin is said to be outraged by any suggestion this was a publicity stunt. Can he deny that more viewers to their new reality show will bring bigger paychecks? In the end unless someone can prove a false police report the two alleged burglaries and the free publicity will only put money in this couple’s pockets.

Hold the outrage Harry I’m sure nobody will prove a thing. By the way Harry, about those insurance claims?

Let me be the first to say Rinna and Hamlin have not been arrested, summoned or charged for a crime. The presumption of innocence is in fact the law. Excuse me while I put my tongue firmly in my cheek.

Will someone please put this unlucky couple in a deluxe covershot in People Magfazine so this crime wave can end?

Take a ride with me right past the scene of the “crimes”.

I don't thin Belle Gray had anything that would fit that full figured burglar!

If it is a publicity stunt, and it does look like it, assuming they have filed a police report, they are taking a big risk!

LOL!!! Noticed that TOO, Shaved. Premium unleaded here is $2.69! Guess the gas there is much better than what we get here! Funny... MY car seems to run OK with the 2.69 grade. What a rip-off!