The European Union Does Not Understand America’s Rejection of Obama 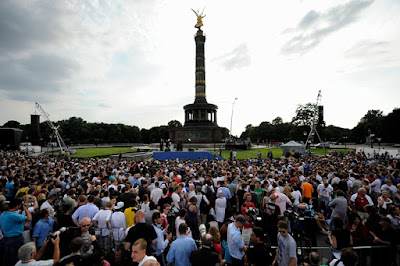 Berlin, Germany—Berliners above all in Germany have a fondness for Americans. It was America that saved this grand, but defeated city from Soviet tyranny. When the Soviets began their punitive blockade around Berlin at the start of the Cold War, America responded with the Berlin Airlift bringing in food, medical supplies and heating fuel. Our pilots risked the threat of being shot down in the process.

During World War Two, Berlin was nearly bombed off the map but was rebuilt in to a splendid and thriving modern metropolis. Today’s Berlin is a great city to live, work and raise a family.

I was personally blessed to be sent to duty as an Army draftee to Germany during the Viet Nam War where I served as a medical corpsman. My very best life memories are when I was living among my German friends in that terrific country.

It was just over two years ago that a tall young man with a great smile came here to introduce himself to the European Union. It was the American Presidential candidate, Barack Obama. He stayed at the prestigious five-star, Hotel Aldon where Michael Jackson once dangled is new baby out a window. This Hotel was heavily damaged during the war but rebuilt to absolute grandeur sitting close in proximity to the Brandenburg Gate.

Obama drew a huge crowd of curious Germans eager to see the first African contender for the Office of President of the United States. At die Siegessäule, or the Victory Tower, a monument to three 19th Century Prussian victories, Barack Obama addressed the jubilant Berliners.

Obama is admired in most of Europe right now as a good Socialist bringing political reform and government re-structure to America. They seem to not understand that even a simple majority of voters can’t change our Constitution. Our founding fathers gave it special protection.

After World War One, there was another man that could draw even bigger German crowds wherever he went. He too had a great smile and offered Hope and Change under the flag of National Socialism. The German people loved their new hero and Germany went from near starvation to relative prosperity. Adolph Hitler was Europe’s new rock star. Of course that was in the beginning of a nightmare costing some 50 million lives over its twelve-year reign.

Had Adolph Hitler not invaded most of Europe or ordered the holocaust he’d have been considered a great man. Of course his Socialist form of government eventually would have brought abject poverty as the great political Ponzi Scheme once again failed as they ran out of other people's money.

Political science still confounds most people that never really learn the pros and cons of various styles and forms of government. They still want to trust those politicians that smile, kiss babies and promise a good life for all. The greatest fault of all people on this planet is their failure to look to history. Every really important society in history was built on injustice and slavery. Socialism is slavery and Socialists are mass murderers.

There was very little difference between Communism and National Socialism beyond their competition for public support. Socialism is the root of these government programs.

Obama is a Socialist and Europe is still full of Socialists and Communists that have never believed in any other form of government despite history.

Europe must recognize that our country is a Democratic Republic with free enterprise at its core. The seizure by bailouts of financial institutions, banks, automakers and the healthcare industry is un-American and absolute Socialism. Obama’s idea of hope and Change is right out of Hitler’s Mein Kamph and Karl Marx’s Das Kapital.

Many in Europe are dismayed that Obama has been discovered for what he is and rejected by most Americans. Millions of Americans are willing to fight Socialism to the death. Fortunately Conservative Americans are already well-armed and have been acquiring millions of more firearms and tons of ammunition to preserve our Constitution and way of life.

It appears in every poll, that Americans have realized just how close they came to becoming another China or North Korea. We can look forward to the defeat of a lot of incumbent Socialists in our Congress. This will bring a new beginning of many investigations into criminal conspiracies, corruption and Obama’s birth records.

Europe must understand and accept that America has refused to become a Socialist nation. Americans will continue to fight as they always had for their Constitution and Bill of Rights. Let freedom Ring.

"Liberty or death, what we so proudly hail
once you provoke her, rattling of her tail
never begins it, never, but once engaged...
never surrenders, showing the fangs of rage
said don't tread on me"
Metallica

Awesome. I can't wait till Tuesday. My only hope is that Pelosi and Reid are kicked to the curb and have to get real jobs.

I cant wait til Congress is back in Republican control so the investigations and supoenas can start.

Why should we give a Rats Ass what the "European Union Cares" They don't have the same situation in Europe as we do here in the USA, and WE have the most free Country on the Planet, but our freedoms are disappearing quickly under €omrade Obama and his Drones. If the European Union loves him so much, let them take him over there, and they can all be happy little Socialists together.

Europe is quickly turning into Eurabia birth control is a suicide pill.

"The European Union Does Not Understand America’s Rejection of Obama"

Which major news outlet claims that?

Why should the Europeans' care a rat's ass if the USA rejects Obama or not?

While being related through the financial crises, the situations ARE different - still, all over the world people are disenchanted with their leaders, so what?

BTW: the "communist" Troubled Asset Relief Program (TARP) you are referring to was urged through the congress by G.W. Bush in October 2008 - even prior to the presidential election of Obama.

I can respect that Europe has way more culture then does the USA. Not that it doesnt exist in america, but one has to search for it in the USA. it is amazing just how stupid europeans are after having lived in Germany for 5 years. Yes I do enjoy the old european charm, no doubt. But i refuse to talk politics with any european who simply does nothing but convince me what freedom hating idiot he is.