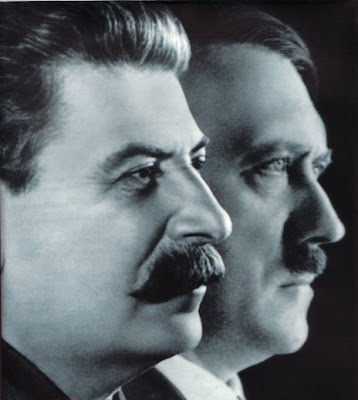 I have to laugh when ignorant people tell me that Adolph Hitler and his National Socialists were Right Wing or somehow Conservatives. That is dead wrong. National Socialism is what it says it is and was modeled directly from Karl Marx.

As the German Weimar Republic suffered during the depression following World War I two Socialist political groups fought for power. The Communists and the National Socialists had nearly identical political platforms.

It was more like an American Primary election race where two extreme left Wing candidates fought to lead the ticket. It was indeed a spirited campaign. Hitler’s National Socialists won and began wealth re-distribution. The Third Reich re-distributed the wealth of Europe’s Jews or used it to finance their spreading empire. Of course businesses and banks were nationalized in true Socialist tradition.

The Holocaust targeted Jews, Gypsies, homosexuals and Communists. The Nazis were successful in convincing most of Europe that Jews were a genetic mutation and dangerous. This concept was backed by many prominent people in the medical and scientific community. The Nazi sterilization program was modeled after those of the United States at the time.

The German people were misled into believing that the Jews were simply being forced to relocate which was true. The genocide program did not begin until nearly the end of the Third Reich and war.

The so-called, Final Solution to the Jewish Question was formulated at a 1942 meeting of Nazi officials nearly ten years after they took power in Germany. The term Final Solution was simple a deceptive code name for genocide that was a carefully guarded state secret.

Stalin and his evil empire engaged in mass murder equal to Hitler’s deeds but he targeted counter-revolutionaries and non-Communists. It was the winners of World War Two that determined who should be prosecuted for war crimes and write the history books.

The Soviets got away with their mass murder program along with the non-stop rape of women and little girls during their occupation of Germany that lasted for years. German females were simply forced to become Soviet military sex slaves. The Communists were every bit as evil and cruel as the Nazis if not more so and they got away with it.

Wherever Socialism’s flags fly, mass murder is the only way they can obtain and keep power.

Hitler’s reign was horrible indeed. It was not just because he and his SS cohorts murdered six million Jews and other assorted unpopular groups, but because he sacrificed nine million German lives in the process. Hitler was a much larger threat to Germany than the Jews could ever be.

Socialism is all about absolute power with an elite group of unaccountable leaders basking in the wealth while their nation is enslaved to support them.

Socialism is for you if you like living in a police state where:

1. Your children are rewarded for informing government on their parents.

2. TSA style checkpoints where you get frisked you like a criminal are everywhere.

3. Thousands of petty laws control every aspect of your life.

5. To earn the same wage as the hamburger flipper after medical school.

Email ThisBlogThis!Share to TwitterShare to FacebookShare to Pinterest
Labels: Socialism

Actually, there are only 2 perspectives:

1. People who believe in Civilized Freedom.

2. People who seek to control, by various means, methods, 'philosophies', strategies, techniques, etc., the activities engaged in by everyone else, but themselves.


All political 'philosophies' which seek to impose their criteria upon others, against said others' Free Will, for the benefit of the imposers, and to the detriment of those being imposed upon, are de facto dictatorships, no different in function than the average school yard bully.


'Do Unto Others As You Would Have Others Do Unto You' works, but only when amongst others of like mind.


There is a valid reason for 'Birds of A Feather, Flock Together'. And for Darwin's 'Survival of the Fittest' postulate.


In the end, if there is a God, Omnipotent Creator, etc., we must be putting on one hell of a show for Him/Her/It.

You guys on the right always crack me up when you bring up the Hitler was a leftist Socialist thing. He was no more a leftist than the man on the moon.

I didn't hear you guys complaininf when Bush II and the Patriot Act sought to curtail your freedoms.

Bush was no Conservative or right Winger. He was just another Leftist creep.

Instead of your hero Obama repealing the Patriot Act he extended it and added more authority.

I didn't hear you guys complaininf when Bush II and the Patriot Act sought to curtail your freedoms.


that's because your ears are packed solid with shit.

or is it your entire noggin?

left, right or wherever, doesn't matter. if you don't respect freedom, you are the definition of fascism, no matter what you tell yourself you are.

Its too late we already live in the USSA now

Its too late we already live in the USSA now

which, as is obvious, requires those who swear to uphold our Constitution, willfully fail to do so.

Pogo said it best: "We have met the enemy and he is us.".