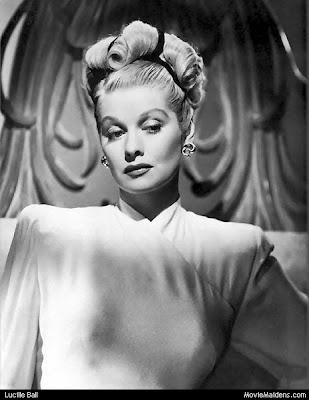 Hollywood, CA—I just finished watching another great Henry Hathaway, film noir classic, The Dark Corner (1946) starring Lucille Ball, Mark Stevens and Clifton Webb. Mark Steven’s plays a recently paroled private eye trying to rebuild his life and business. Ball plays the private dick’s new secretary. After the PI is targeted and endangered in a somewhat convoluted scheme, Ball’s clever character comes to his rescue at every opportunity. This film is available for instant play if you’ve got a Netflix account.

As a long time real life PI, I can’t imagine the luck of having a secretary like that in a million years. Together they overcome amazing odds and in case you’ve never seen the film I won’t spoil it be revealing the ending.

In The Dark Corner, Ball was a stunning 35 year-old looker that appeared much younger. Her grace, charm and acting were terrific. This is amazing in spite of the fact that Ball left, The John Murray Anderson School for the Dramatic Arts in New York City after only a few weeks. He acting coaches told Ball she had no talent!

As a child I grew up with a family TV show, I Love Lucy. It had its comic moments but it was more a comic soap opera of sorts in the lives of two couples, the Ricardo’s and the Mertz’s. Lucy was always up to mischief that usually backfired to the chagrin of her real life husband Desi.

Ball died in 1989 at age 77, when a recently repaired aorta ruptured. Aging and death is most unfair but the truth is we’re all in this together and none of us will get out alive.

What I really did not know was Ball’s age. She was already in her 40’s when she began her, I Love Lucy series. Her first husband Desi Arnez was seven years her junior.

This famous TV pioneer couple made entertainment history beginning with the three camera shoot of their series. With three cameras, scenes could be shot and edited together saving countless hours of setups and retakes.

Together they formed Desilou Productions and that led to many thousands of hours of programming that still seen and enjoyed today all over the world. Their 20 year marriage was volatile and finally ended after their second divorce filing in 1960. It’s always been said by their biographers that their love for each other never really waned, they just had difficulties mostly attributed to Desi that could not be overcome.

Not that long ago I had to do some business with Kelsey Grammar’s production company, Gramnet which was at the time located in the Lucille Ball Bungalow at Paramount Studios in Hollywood. I suspect the name Lucille Ball will be repeated hundreds of years after her death. She was indeed an artist.

When doing a little research for this story I learned that Ball actually joined the Communist Party and registered to vote that way in her earlier days. Ball’s politics were as red as her hair. The Communists always recruited members heavily in Hollywood because they knew that movie stars influence the masses. That still is the case today for sure.

The funny thing about Hollywood’s Communists, they all made huge fortunes through Capitalism. I will never be able to figure out that paradox.

Enjoy the trailer for The Dark Corner below:

The funny thing about Hollywood’s Communists, they all made huge fortunes through Capitalism. I will never be able to figure out that paradox.

it's not really a paradox.

most people who claim to 'believe' in the theory of 'communism' really only believe in it's imposition upon everyone other than themselves.

in fact, authentic communism, at it's most basic level, requires that there be no 'leaders', no 'authorities', and no 'ruling class'.

In truth, Ball signed up as a communist because her grandfather, the family patriarch, was a life-long socialist. He had suffered cruel financial reverses due to an unfair court settlement against him(a young man was shot by accident during a picnic at his home and he was ruled culpable). A man of modest means, Ball's grandfather lost everything and it embittered him toward a U.S. justic system that he saw as rigged. After her first flush of Hollywood successs, Ball relocated her family to California, where he retired grandfather enjoyed lecturing the neighbors on the faults of capitalism. He insisted on all his family joining the Communist Party. Years later, this came back to briefly haunt Lucy during the McCarthy era.

By all accounts, Ball herself was not very interested or active in politics.