My Take on a Missing Phoenix Police Sergeant found Murdered 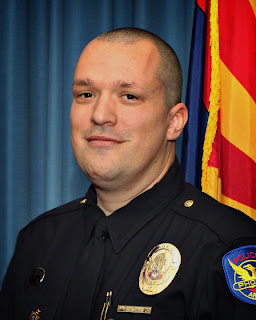 Phoenix, AZ—Usually when police fail to respond to radio or MDT transmissions it’s usually the failure of equipment that’s responsible. Officers are trained to check their radios if there are prolonged periods of silence perhaps due to a dead battery.

The South Mountain precinct is usually a busy assignment for any cop. There are trailer parks, loads of very modest homes and often they include various farm animals and chickens. There is the South area of the state capital campus that’s patrolled by the Capital Police Department. At night this area is desolate and void of all but a few homeless types that can be found sleeping there.

The Capitol police have their own radio frequencies and generally are not alerted about nearby matters handled by Phoenix police.

Sergeant Sean Drenth of the South Mountain Precinct was missing and incommunicado. Fellow officers along with the helicopter unit began a search just after 10 PM last night.

An hour later a Capitol police civilian security aid found an apparent abandoned Phoenix police car in an alley near 17th Avenue and Jefferson near that sits between the headquarters for the Department of Corrections and the Motor Vehicle Division. It’s an area with a lot of empty parking lots. Near the vehicle, was the body of sergeant Drenth who suffered apparent gunshot wounds.

Somehow I doubt that the capital police even knew that Drenth was missing. That discovery may well just have been a coincidence.

The officer’s secondary weapon kept in an ankle holster was missing but later found nearby.

This story is strange in that it would be unusual for an officer to not inform the dispatcher if he was making contact with a citizen or down on a traffic stop.

In that area, at that time of night it would not be unusual for an officer to step out for a nature call. Perhaps he encountered something during that period.

More than likely I have to believe that there was something else going on. Perhaps he was visiting with someone for a pre-arranged meet. This does not fit the usual scenario of a random street stop that went wrong. I’d be looking for evidence in the officer’s personal cell-phone records including text messages.

I know that this will be an intensive investigation and somehow I feel it will be solved.

The dead sergeant was under investigation for theft of public funds in connection to an overtime scam. Arizona laws carry huge penalties for this behavior. A nasty prison term is guaranteed.

Arizona has no statute of limitations for prosecuting this crime. As always he who blabs gets the deal while the rest hang.

It is looking like this death is a suicide unless he was believed by others to be cooperating and someone (another cop) silenced him.

This is indeed taking an ugly turn.

Why did Drenth visit George Contreras 2 days prior? And which of the 2 of them suggested Contreras handle Drenths gun? Georges comment to Seans wife sounded like a nice little dig. Ie if he would have stayed true to his friends, hed still be alive.

Either way, Drenth was a no good scum bag and reaped from what he sowed.

My conclusion: Drenth was b/t a rock and a hard place and blamed Contreras for it. He knew it was ultimately his own homicide or suicide and he wasnt going to give the control to someone else. He chose suicide but attempted to set George up for it. George figuring it out kept an alibi at all times. Sean should have just paid for his crime by doing his own time and made it known to all that he would not talk.

He only worked at the South Mountain Precinct for a couple of weeks before his death. He was promoted to Sgt. while at the Squaw Peak Precinct where he'd spent the preceding few years. He was a supervisor for a bunch of embarrassing Hooligans and his own Lt. was a nut job who retired soon after. A large handful of the officers Drenth supervised were possibly facing charges for actions taking place while under his supervision. Many of them were also transferred out of Squaw Peak at the same time. I'm personally aware of a civil rights attorney who was sniffing around at the time of his death. There were quite a few officers who stood to be fired if not criminally charged.

You are as wrong as chicken crap jack harris! You are the scum bag and contreras is too! You all will get yours too! Come see me !