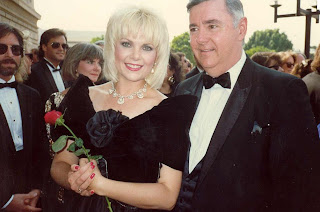 Chicago, IL—One of the most important landmarks in Chicago is the old Town Hall, 023 District station. It should be restored and turned into a museum or at least a watering hole for off-duty coppers. I never worked that district but would have loved the assignment for sure.
One veteran of this building is my pal, Andy Murcia.

I met Murcia long ago as we were waiting for our cases to be called in the old Branch 64 courtroom of Judge Lawrence I. Genison. This was the last stop misdemeanor court for those defendants demanding jury trials. Nobody wanted jury trials just a better break before this very soft judge.

Andy had just made sergeant at a time when few white males could be promoted do to never-ending litigation in the federal District Court.

Andy had a great part-time security gig at the Ambassador East Hotel on the gold Coast. One night he happened upon a terrific looking lady that changed to good sergeant’s life forever. That lady was none other than, Golden Globe and Emmy winning actress Ann Jillian.

If you are too young or seem to have forgotten Ann’s lively work a search of YouTube will bring up many video clips for your enjoyment.

Ann was making a smooth transition as the child star of Babes in Toyland, Gypsy and a memorable Twilight Zone episode. Ann and Andy fell in love and Andy eventually took a leave of absence to become Ann’s manager. It was off to Hollywood. Despite terrific success soon Ann took her own leave of absence to become a full-time mom. Their son Andy is a tall, strapping 18 year-old college freshman today.

Andy is quite the writer and I thought I’d share his memories of his old 023 District home with my readers.

Thanks Paul. I don't know Andy Murcia but I do know people that knew him. Andy was from that generation that I think were the greatest coppers ever. I've got 30 years on myself but I wish I was on the job back then, in the 60's and 70's. Guy's like Andy Murcia, Jack Runyan my first Sgt, a guy I will never forget and one that I wish everyone could have been as privileged as I have been to meet him, Bob Garber who could tell more true and unbelieveable stories than any author could have. All guys who were the absolute best and impress me today at the age of 56 with 30+ years on as the did when I was a wide eyed rookie a long time ago. I obviously hold them in the highest esteem.