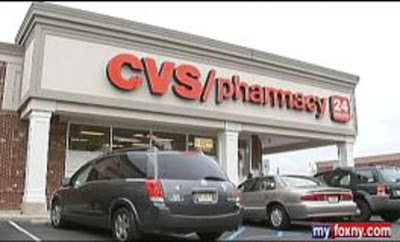 Garwood, NJ—A local woman was suffering from an asthma attack and quickly needed her inhaler prescription refilled the CVS Pharmacy. She was told by the pharmacist that the cost came to $21.99 but she only had a $20.00 bill. The pharmacist refused to waive the remaining measly two bucks. The stricken woman’s boyfriend then offered his cell phone or wallet as collateral as the women was on the floor wheezing. CVS was willing to simply watch the woman die refusing aid.

The pharmacist should have at least called 911 for the woman since asthma attacks are often fatal if not treated quickly. The boyfriend called a paramedic friend who responded and rendered aid.

CVS had no legal duty and perhaps there were signs of deception but nothing justified this massive lapse of simple decency. To not even dial 911 shows the pharmacist’s lack of understanding of his professional mission. I’m sure the licensing board will investigate this and take appropriate action.

I want to argue that CVS may have been played as a sucker and suspected they were getting victimized by the woman and her boyfriend. Even if that seemed to be the case you cannot gamble with a human life and have a clear duty to step up as a member of the human race.

This disgusting outrage was an apparently the action of a single nasty employee in absence of a company policy to deal with this kind of problem.

I will destroy my preferred CVS card on my key ring and will never enter a CVS facility again. I will rejoice as I see CVS stores close everywhere. I suspect there is a lesson to lean for the competitors that will be gaining CVS customers.

Email ThisBlogThis!Share to TwitterShare to FacebookShare to Pinterest
Labels: Boycott

There's more to this story that needs to be revealed.

Do you want to gamble that a person with a valid prescription for the inhaler refill is faking over $2.00?

Giving her the inhaler for the $20 she had was the only right thing to do.

You deal with the "fishy" issues later.

"I will destroy my preferred CVS card on my key ring and will never enter a CVS facility again. I will rejoice as I see CVS stores close everywhere. I suspect there is a lesson to lean for the competitors that will be gaining CVS customers." (well spoken) ..

What ever happened to good old common sense..I would have given her the inhaler let her use it and let her lungs open up.

You’re right about the fact that CVS should have given her the inhaler and worried about the $1.99 later.

How many good folks working for this company will suffer because of one CVS goof’s stupidity?

Will you give consideration to CVS if they have a response with a plan to prevent a similar incident in the future?

Can CVS make a mistake and recover from it responsibly? What should CVS do?

CVS needs to hire a professional investigator to examine every aspect of this matter to determine what went wrong and why.

Surveillance video must be studied and background investigations on the couple are warranted.

The pharmacist’s explanation must we weighed with his responsibilities for the company and his licensing authority. He should not become a scapegoat for lack of a policy. Responsibility must be properly located and fixed.

CVS has no criminal or civil liability that I can see and don’t owe the woman anything at all aside from an apology.

CVS needs to make a solid policy about emergency needs of the people they serve. That policy needs to place human life above profit or loss.

Every pharmacy needs a policy to deal with emergency matters that can be expected to happen. CVS has a duty to render minimal aid and call for proper government services. If people are there for medicine that enough notice that common medical emergencies can happen

CVS could have come off like a good responsible neighbor by providing the inhaler and calling 911. That would have been positive PR instead of the disaster they now have.

If I was the PR person for CVS I’d offer an apology to the public as I announce the steps taken to insure plans to deal with this failure.

I’d also offer that women involved free asthma medication for the rest of her life in exchange for an acceptance of the apology and a signed release.

Calm down Tiger! CVS just got slapped with a $75 million judgment for supposedly not appropriately scrutinizing their cold medicines with epinephrine and blamed for a regional spike in crystal meth production. A crock of ship thank you very much.

Whether a mans' mistress is Lady "H", Snow Queen, Zoom Zoom or basic Kush...is only Portugal the beacon of libertad on the entire planet?

Start passing out M60's and 1000 round bandoleers of NATO to the citizens I say. Let us stand in on all sessions of Congress...if bad things are being done, close the doors and pull triggers. Misfires will be considered acts of God. lol

Let us stand post along our border and frag any two legged neighbor that is coming across the border without an invitation. Harsh you say? (Bonus points if Catholic aka the harlot of nations...)

Government officials need to be once again taught to fear the People.

If you are down to your last $20.00 in life, do you really want to live any longer. I mean then she would have no money for food and then strave to death... or no money for heat and die a bad frozen death... You got to weed out the losers in life...

CVS has always been something else. But in the case of a regular customer, with prescription on file, in the throes of an asthma attack, to demand full payment, not offer to dial 911, not point out that Primatene Mist (OTC) might be affordable (on their shelves), not to pick up the difference themselves out of the most basic human kindness, or to ask another customer to do so, is UNFORGIVEABLY SHAMELESS. I cannot go into a CVS after this. My principles won't let me. Please all of you, think about it. This could have been you gasping for air on the floor of CVS. Stand up for principles and BOYCOTT CVS. Don't stop there. SPREAD THE WORD. EVERYONE should hear this story. To see original local news report (video) of this story, it's on consumerist.com

Why did the boyfriend not call the on duty paramedics? BS
They know how much the inhaler costs. They only brought 20.00 on purpose. She is faking so she can sue. I thought a highly trained "private detective" like yourself could sniff the turd beneath his nose. If this women needed asthma medication that bad she should have gone to the hospital, not CVS. It like going into a diabetic coma and your boyfriend taking you to get an insulin shot at CVS instead of going to the hospital. Save it. CVS sucks anyway, but this is crap.

I don’t care about the age or intelligence of the woman or her boyfriend. CVS has alleged professional and educated pharmacists who knew or should have known not to gamble with lives over two dollars. CVS should have called 911 the instant they became aware of the woman’s distress.

CVS is a medical provider by choice. Perhaps they need to cast of their pharmacy business and sell ice cream and liquor instead.

CVS had a name and reputation to protect and failed miserably. They deserve a boycott and bankruptcy if they want to gamble with human life.

My business will be with anybody but CVS unless they find a graceful way to fix their mess.

I have felt the pressure of CVS refusing my inhaler refill over a copayment charged by CVS in NC and by the grace of god someone paid it so I was rather lucky but hearing this makes me sick to my stomach...

I will now join this fight to close down CVS Pharmacy and destroyed my CVS Card and now I now I cannot trust this Pharmacy if I should have another attack it may be me next to lose my own life.

I believe CVS should stand up to the plate and face charges for taking someone's daughter away for a losly $2.00...or at least be healld liable in a civil suit to aide in the cost of what lay ahead for this girls family n friends now tramitised dearly thanks to Our pay or die perscription cost to CVS Pharmacy.

I just have one question to the clerk whom refused her the right to live by his/her stupidity...if the tables were turned around and she refused to give up the inhaler to save your life would you expect her to give it to you and if so why is your life more important for her to save then it was for you to save hers?????????????

OK everyone. THere are jerks who are pharmacists (we have some at other pharmacies too). So don't be quick to judge. The pharmacists deal with UNBELIEVABLE idiots but CVS will investigate this and handle it. Ever had a jerk for a doctor? Or a waiter? Or a salesperson? It does cross over the employee borders you know.

OK everyone. THere are jerks who are pharmacists (we have some at other pharmacies too). So don't be quick to judge. The pharmacists deal with UNBELIEVABLE idiots but CVS will investigate this and handle it. Ever had a jerk for a doctor? Or a waiter? Or a salesperson? It does cross over the employee borders you know.

CVS needs to go, thousands of people out there have many experiences just like the inhaler incident. I challenge all current / past customers, employees and any family members to post their adverse/negative experiences with CVS.

There is strength in numbers, CVS is all wrong to customers and employees.
Post your stories about CVS.

Does anyone remember the man choked to death by a manager for stealing toothpaste and crayons at a CVS , yeah stealing is wrong, so is murder !
To stay on point, the public is still waiting for the explanation over the asthma incident.