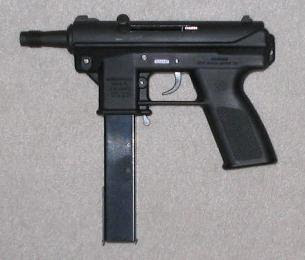 Lancaster, CA—During a traffic stop at 3:40 AM by L.A. County deputies, shots rang out from the car they pulled over and a short vehicular chase began. When cornered a gang member, parolee, Christopher Orlando, 25 and Shayla Janelle Harper, 26 were placed under arrest.

Police discovered the criminal duo’s really crappy Tec-9 pistol had malfunctioned and it has been suggested that may have prevented injury or death to the deputies. The Tech-9 was quickly elevated with photos and fiction by local media to the status of a superior weapon that was once outlawed by that federal law that had expired.

The Tec-9 is difficult for an experienced marksman to shoot with any accuracy, is chambered for the underpowered 9 MM caliber and is a woefully unreliable weapon. The thugs would have been much more dangerous had they a conventional revolver or pistol.

This is yet another prime example of ugly guns being portrayed as more powerful or dangerous than prettier firearms.

The gun is the least interesting part of the story when the media could have informed readers and viewers about the two criminals and their past. I think viewers are much more concerned about dangerous, already convicted young criminals roaming our streets rather than getting an embellished media sales pitch on a really lousy, poor man’s gun.

This was nothing more than a cheesy media attempt to sway public opinion to support yet another unconstitutional gun ban.
Posted by Paul Huebl Crimefile News at 10/30/2010 07:58:00 PM