Trying John Demjanjuk for War Crimes is a Pointless Exercise 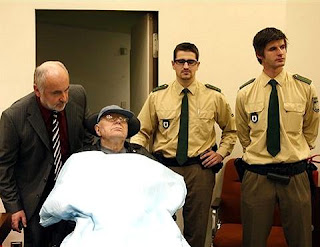 Demjanjuk’s trial has reached the one-year mark without any smoking-gun or even newsworthy revelations being made.

The trial of Demjanjuk is largely symbolic since Germany has no death penalty and the worst that could happen is that the accused war criminal would spend his remaining days in a nursing home. Demjanjuk most likely will never leave a nursing home anyway since he is in need of regular blood transfusions and is very frail.

Busch has raised Demjanjuk’s declining health and a seemingly valid claim of Double Jeopardy. Demjanjuk was tried and eventually cleared of war crimes in Israel after documentary evidence supplied by the United States Office of Special Investigations was determined by the court to be forged. Germany has no Constitutional guarantee against Double Jeopardy but it’s a worthy argument just the same.

Germany has at best a paper thin case against Demjanjuk if for no other reason he’s outlived virtually every potential witness against him. Trying Demjanjuk has been a monumental challenge since the court has to work around his constant medical treatment.

Trying Demjanjuk has no more meaning now than trying a breathing corpse. They only people suffering are the defendant’s innocent family.

The War Crimes Trial of John Demjanjuk has turned into a pointless exercise. Perhaps it’s time for Germany and the rest of the world to move on from that dark chapter of history.

Germany has paid for their sins with the needless loss of its own 9 million productive citizens because of the tyranny of National Socialism.
Posted by Paul Huebl Crimefile News at 10/22/2010 06:07:00 AM

Easy for you to say Paul. Did you lose any family members in the Nazi concentration camps in WWII? My Dad was one of those who liberated them as a soldier in the Army. He told me about some of the stuff he saw. It was horrible.
I say let this trial go forward and see what the evidence is.I don't care how old this man is, justice must prevail.

1. This guy is not a German but a conscripted Ukrainian laborer. The Nazis forced him and thousands like him to do their bidding or be killed.
2. He was arrested, tried, convicted and sentenced to death by an Israeli court. They reversed the conviction and set him free because he was in fact innocent.
3. Arrested again, put on trial with some kind of a collective guilt theory is no better than the kind of Due Process used by the Nazis.
4. There is no penalty here except on the old guy’s family. Most people will never be lucky enough to live that long and be guaranteed good care in a nursing home.
5. Evidence? A year later and all they have done was to make a case that the Nazis victimized people in concentration camps.
6. Collective guilt is a dangerous way to dispense justice.
7. This trial is pure theater and nothing more.

The Jews forgave the Kappos that betrayed them an collaborated. Kappos beat fellow Jews and even knowingly ushered them into the gas chambers.

Kappos were worse than the Nazis and they never tried one Kappo. There were a few Kappos beaten to death when the camps were liberated.

There is no solid evidence angainst the man.Its basically a witchhunt or a Will County style prosecution.