The Nazis Could have Won World War Two But for… 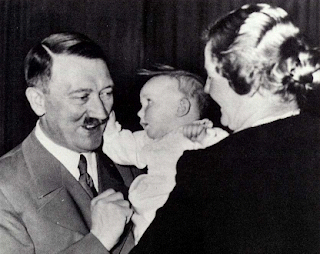 Berlin, Germany—There were three major blunders by Adolph Hitler that brought about his defeat.

1. A valiantly fought air battle over Brittan was lost by the Germans. They would have instead clobbered the UK with a ground invasion. The Brits had an unarmed population and their young men trained with sticks to fight the enemy that never came. The unarmed cops and population was no match for armed invaders. The Brits never learned from that blunder. Additionally the politicians in the UK like Neville Chamberlain were accomplished Nazi collaborators. American politicians collaborated with despot Communists back then as they still do today. The UK would have gone along with Nazi rule with a stiff upper lip!

2. There was a huge population of Communist hating Ukrainians in Russia that would have aligned with Hitler to defeat the Soviets. Instead the Nazis enslaved and further victimized the Ukrainians. That was a colossal blunder.

3. The Nazis developed the Messerschmitt fighter jet that could have easily defeated all of the Allied bombers and their prop plane escorts. Hitler just didn’t understand the value of the fighter jets and put his money on the failed V1 and V2 rockets. The rocket program was beset with constant sabotage as Germany and its people were being bombed into a burnt cinder.

Adolph Hitler was a brilliant communicator and Socialist politician who was loved and admired around the world. Hitler eventually was revealed as despised despot. Hitler’s desire to conquer the entire world and obvious mental illness thankfully was his undoing. Hitler’s reign caused 50 million needless deaths along with hundreds of millions of additional lives destroyed by ghastly injuries and tyranny.

Germans are a loyal group of people that were programmed for centuries to accept authority. Accordingly they gave unquestioned allegiance to their Furher.

Beware of any overly popular politician since history redundantly shows they are all tyrants in the end. Small governments that work for the people are the answer.

Here is a test. Switzerland has not been in a war in many centuries despite all of the killing that has surrounded that nation. They Swiss are trusted as safe-keepers of the world’s wealth. Name at least one Swiss politician and William Tell does not count! I guess they keep a pretty low profile, don’t they. Perhaps the USA could learn from the Swiss? That will never happen.
Posted by Paul Huebl Crimefile News at 10/23/2010 06:57:00 AM

1 Germany would have won the battle of Britan if 1 The radar stations were destroyed 2 They would have kept attacking Fighter Command instead of bombing cities
2 The Ukraine was decimated by Stalin in the 30's and had a reduced population and no military to help Germany.
3 German technology was too late and too complex, The tiger and panther tanks had 100's of more parts than Sherman or T34's.
Germany lost because Hitler would not listen to his advisors, He declaired war on the U.S. for no reason after December 7th and the Germans had no oil reserves.

He also made a big mistake attacking the Soviet Union in the first place.

He did not want to invade Britain, due to not being able to control the skies over the channel.

Had he reached the UK he would quickly have overwhelmed the unarmed and defenseless population as you indicated. And there would have been no shortage of local collaborators, of the type who now work in local government.

What Hitler should have done:

1. Invade Great Britain at the same time the air battle continued. An overwhelming invading army would have mopped up the island in no time, thus overcoming the deficiency in the air war and effectively eliminating the European war.

2. Do not execute Operation Barbarossa, or at least delay it for another year.

The U.S. would have devoted all their resources towards defeating Japan, and the Pacific war would have ended by '43.

With a defeated Japan and pacified Europe Hitler could have then initiated Barbarossa if he was still inclined, and defeated the Soviets.

The Cold War would have been between the U.S. and a Greater Germanic Empire.

Thank God he didn't do those things.

"Adolph Hitler was a brilliant communicator and Socialist politician who was loved and admired around the world."

Remind you of anyone in the U.S. these days? Scary stuff.

Submarine force not expanded,placed too much into surface fleet.

Too many design groups competing against each other.This wasted precious resources and time,money.


Developement of the best small arm of the war STG44,was slow and held in secret from Hitler.STG44 quantum leap in small arms design.

M262 developent should have been N#1 priority.

Fixed field fortifications like the Atlantic Wall and Siegfried line complete waste of time,money materials and manpower.Violated many German military doctrines that they used against thier enemies.