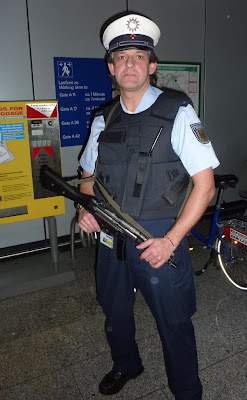 The fools in media and our own state department are waning travelers of non-specific threats, but their hysteria defies logic.

Yes airports have been attacked before but today they are now somewhat protected at least in Europe by cops with automatic weapons. Airports are no longer the soft attractive targets they once were.

If there are going to be Mumbai, India style attack in Europe or for that matter in the United States, they will happen in places traditionally unprotected or covered by unarmed and therefore worthless security. I’m talking about rock concerts, schools, shopping malls and churches that are filled with people. What better place for terrorism than a Gun Free Zone?

It makes more sense to threaten the hard targets and attack the soft ones. One thing for sure governments despite their claims can’t protect their citizens from terror attacks. Governments are expert in insulting and aggravating their own citizens through random searches of innocent and law-abiding people. Government loves to trade pretend security for liberty.

I will take my chances with the American second Amendment and terrorists any day over Nazi style random searches.
Posted by Paul Huebl Crimefile News at 10/04/2010 09:11:00 AM

How about the Chicago airports! Unarmed law enforcement officers working for the Chgo Dept of Aviation on the outside. I see them all the time! I see no other armed officers except customs in the international terminal and they are located in a secured area!!! Chicago airports police/security is a joke!

Dropped a gf off at the airport and was amazed how completely fine everyone was with lining up and waiting their turn to being groped. No "fight" in a one of them.

I set her heavy bag on the conveyor briefly bypassing the first numbnut without having been properly vetted. All Mr. TSA did was keep a keen eye on me. Not a word. A kiss and hug...and she was on her way.