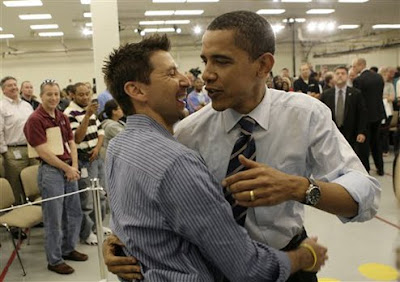 Recently there have been two tragic suicides attributed to bulling. The most egregious one was a 13 year-old boy who hanged himself after being taunted because he was openly Gay. His tormentors committed no crime and won’t be prosecuted. I guess it's too difficult to imagine a kid so young being convinced he's gay.

The other case is the college student who was secretly caught on camera having Gay sex with his pal. The act was broadcast live on the Internet for the entertainment of his tormentors. When the student learned of the prank he became so distraught that he said his goodbye on Facebook and jumped off a bridge. Here there was a serious crime of wiretapping and privacy invasion. The offenders here face deserved felony convictions and prison.

Homosexuality has been a taboo on earth for many thousands of years in most societies. Gay bashing is not some new thing. There are strong religious views of some and that many other people simply find the conduct repugnant. We seem to forget that homosexual acts between consenting adults were serious felony crimes in many American states. Those laws were changed only in our recent history.

In the early 1970’s Chicagoans were routinely arrested if they appeared in public dressed in the clothing of the opposite sex. Today over half the women on Chicago’s streets could face arrest for that violation. Of course the arrests back then were prominently of gender confused men usually acting as prostitutes. That was despite the fact that the, Improper Dress or Exposure Law had nothing to do with sexual commerce.

I subscribe to the theory that Gay people can’t control their preference anymore than we can control the dominate hand that we sign our names with. Sex is a natural function we all need to engage on a regular basis within the parameters of our orientation.

I’m also convinced that it must be a serious inconvenience to deal with the sexual programming our creator has given too many of us. Imagine having to deal with being Gay, transgendered or even being a pedophile. These people are cursed with punishment for their activities wherever they go. There is no known cure for sexual deviation. It’s simply a birth defect.

There are those people that rationally but perhaps wrongly fear that these traits can become learned behavior rather than just something programmed into our DNA. They believe that homosexuality is contagious and fear for their children accordingly.

I believe that people that experiment with homosexuality always go in their pre-programmed direction in the long run. Of course there are those that simply don’t care what sex their bedmates are.

The lesser sexual deviations not discernable as dangerous such as homosexuality, gender identity disorder or some fetishes are more tolerable. In the past few decades, American society has buckled under demands for legitimization and acceptance of the most common forms of sexual deviance to a point.

There will be Gay basing as long as there are Gays and no law can change that. This is a fact that Gay people must take into account as they blend into society. Exposition of their orientation is usually the catalyst for the bullying of Gays.

Our sexual orientation or sex lives should be a private matter rather than a public display. Those who chose to advertise their sexuality may have to pay a price as they find themselves on the receiving end of discrimination in jobs, housing or even friends. Parents are also free to disown their Gay children and do on a regular basis.

I find that teasing or taunting of Gay people is certainly anti-social behavior similar to calling African-Americans, niggers. We all can be called something hateful and offensive over something we have no control, but that’s not a criminal offense. Hateful speech and thought is constitutionally protected activity. That does not make hateful speech socially acceptable and hate mongers often reap what they sew. Nobody likes mean people.

Emotional bullying is not nor should it be a crime, even if it is hateful. Certainly any, threat or act of violence is a crime. Hate on the other hand is mere thought and in America we must never create or allow for Thought Police.
Posted by Paul Huebl Crimefile News at 10/03/2010 10:22:00 AM

I always find you interesting. but here I must disagree on your view of hate crimes.

I have changed my mind on my view of hate crimes because of a couple of factors.

1: The federal hate crimes law was created in 1964. State Laws where created long before then. Its not like there was a big backlash when the thing was passed to repeal the Federal Hate Crimes law. 2nd then it comes down to the classes of people in which you wish to protect.

2: The Supreme Court made a unanimous decision on where the line is that separates Speech from Assault.

3: Courts have used previous statements in both the trial and Sentencing phase in criminal cases. I would not want to be at the other end of a DA rant because of my previous statements. Which does make me think about not saying certain things ie chilling my speech.

I have not done enough research on this issue so i can't really say. I don't know what the test is that allows a statement in or out but it is probably not one in favor of a defendant

Thoughtful piece, I always enjoy the posts on this blog. It is too bad that for too many people, including those who make our laws, that there cannot be any rational discussion of sexual taboos and what related activities can and/or should constitute a violation of law.

Huebl, you could not resit taking a cheap shot at Obama with this picture suggesting he's Gay.

Huebl, you could not resit taking a cheap shot at Obama with this picture suggesting he's Gay.


surely you're not implying that obama is a cheap homo, are you?

Now the other myth that gets around is the idea that legislation cannot really solve the problem and that it has no great role to play in this period of social change because you've got to change the heart and you can't change the heart through legislation. You can't legislate morals. The job must be done through education and religion. Well, there's half-truth involved here. Certainly, if the problem is to be solved then in the final sense, hearts must be changed. Religion and education must play a great role in changing the heart. But we must go on to say that while it may be true that morality cannot be legislated, behavior can be regulated. It may be true that the law cannot change the heart but it can restrain the heartless. It may be true that the law cannot make a man love me but it can keep him from lynching me and I think that is pretty important, also. So there is a need for executive orders. There is a need for judicial decrees. There is a need for civil rights legislation on the local scale within states and on the national scale from the federal government.

We have many thousands of laws too many now. The laws against threat, assault, battery and murder are adequate.

We don't need more laws but it would help if we could keep bullies locked up for the real crimes they do.