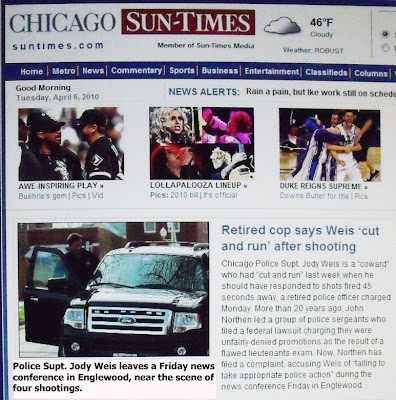 Chicago, IL—Yes, Chicago’s local media has been in the pocket of the Daley/Burke Crime Families for a very long time. They’ve killed story after story about corruption whenever they could.

Now there is the Internet with its bloggers and keeping those dirty secrets has become a real challenge.

The allegation of Cowardice by Chicago police superintendent, Jody Weis would have never seen the light of day in the past. It would have circulated as an unsubstantiated rumor throughout the department. The allegation itself would have gotten a City Hall whitewash job and the media would have avoided mentioning it like a viral infection.

Retired Chicago police sergeant, John Northern became aware of the Weis’ conduct and how he left the scene of an in progress homicide and made a formal complaint. This kind of complaint is as serious as any since it did involve a killing and and immediate public safety action.

A complaint of that nature is indeed hard news that deserves proper investigation and coverage by anyone who dare call himself a journalist. I’m now aware less than 24hours earlier officers made calls to the local TV news organizations and were politely blown off by assignment desk people, producers and reporters. They said it was a non-story and some claimed it never happened.

The story was backed up with the broadcast video of the CBS2 interview where Weis, gave his now famous quote, “I’ve gotta run!” I’m personally aware that CBS2 sought clarification from Weis all weekend. Weis refused to surface and explain where and why he had to run. I posted the significant portion that CBS2 interview conducted by Kristyn Hartman and it speaks for itself.

Thankfully, Hartman did not shirk her duty to cover the non-stop bloodbath in the Englewood district. Weis also should have used a little class to suggest that Hartman and her photographer leave the area for their own safety.

That CBS2 interview clip and reports from fellow officers that called for backup at the shooting scene show that Weis never appeared. This is solid evidence of Weis’ abject cowardice.

That changed when the department’s media flack responded the Sun Times. They quickly spoke for Weis calling the allegations absurd. The Sun Times then informed their readers of the complaint and its ramifications. Had it not been for the police bloggers this story of miserable cowardice may have never seen the light of day.

I only hope that the massive extortion and bribery racket that is the City of Chicago government can get its moment in the sun too. The people of Chicago deserve better than to watch their hard earned tax payments used only to generated re-election campaigns through un-needed public works projects instead of vital city services.

Former FBI, need anyone say more? True there are great and competent SA, but there are WAY TOO MANY that act and react like this clown. Sorry my home town. As a former TV journalist, I'd be all over this case until the end-- come on my former colleagues, get in the game and do the story.
Rod Bernsen
LAPD SGT, Retired

Former FBI, need anyone say more? True there are great and competent SA, but there are WAY TOO MANY that act and react like this clown. Sorry my home town. As a former TV journalist, I'd be all over this case until the end-- come on my former colleagues, get in the game and do the story.
Rod Bernsen
LAPD SGT, Retired