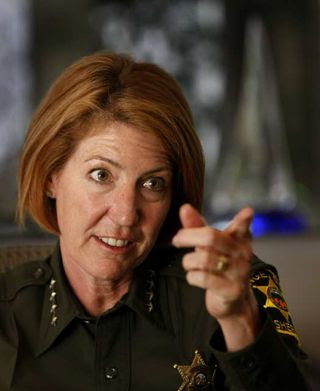 Orange County, CA—After the last Sheriff, Mike Carona was felled by corruption charges, the County Board found a replacement. The recently retired lawwoman, Sandra Hutchens seemed perfect so they appointed her.

Perfect? She spoke well and looked fine but she was and is a gun control zealot and came with the identical Liberal culture of every current Los Angeles politician.

Unlike her predecessors she refused to issue new concealed weapons permits and revoked many that were already issued. Crime had not taken a vacation on her watch so why hold down law-abiding citizens so criminals can victimize them?

Getting a concealed weapon permit requires completing a 21 page uniform California application. The CCW application form is twice as long and invasive for personal information than the employment applications required of the cops we hire. The Sheriffs have arbitrary power to deny the permits or grant them. Of course, all felony and most misdemeanor convictions are a bar to granting the permits. Demonstrated firearms and use of force training is required of all CCW permit applicants.

Carona handed out several special deputy stars to his pals. That’s never a good idea but it’s something Sheriffs have done for ages. Hutchens rounded the stars up and revoked them. Nearly every incoming Sheriff routinely does that.

Carona did a lot of things wrong except subjecting Orange County’s citizens to the Liberalism of La La Land.

Orange County does not subscribe to the extreme Liberal ways of L.A. When they hired Hutchens they were asleep at the wheel and let this woman with foreign ideology take the helm. Hutchens took the department in the wrong direction.

Hutchens spent money feathering command staff positions that showed she does things exactly like they do in Los Angeles. Spending money they don’t have is the way of life for that Socialist run city. Today there are plenty of qualified candidates that deserve consideration for the position. This time there will be an election by voters.

She is an enemy of liberty.

We've been exposing Sandra Hutchens' true self for a while. Have a look at the following links detailing her being sued, her foreclosure, and her tax liens:

All things she's tried to hide, and the media is helping her keep it quiet.