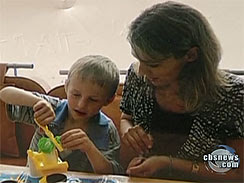 Moscow, Russia—I deal with a lot of adoption cases but I find this one incredibly painful to think about.

A seven year-old boy was put on a plane to Moscow with a note in his pocket he could not read. The note was from Torry Hansen, a woman who adopted the child and now wanted to rid herself of the challenges of motherhood. She merely dumped the kid on the plane like taking a bad dog back to the shelter.

She claimed the kid was psychotic and complained that she was misled about the boy’s mental health. She wrote, “the child is a liability.”

I’m beyond shocked at the unbelievable cruelty of this despicable act.

In life we never get more than hope that our children will be perfect and healthy in every way. Kids are born every day with handicaps, defects and disfigurements but parental love conquers nearly everything. Any real mother would have done whatever it took to deal with any and all issues the boy had.

In addition to being placed in a strange home the child must have suffered from culture shock with different food, odors and learning English. This would be a huge challenge for any seven year-old child.

If there is something good about this horror story, it’s that Torry Hansen won’t be in this unfortunate lad’s life. This experience will make raising the boy even more difficult. I don’t want to see the woman punished. I’d rather people like Hansen dump kids rather than murder them any day.

I hope some kind, childless couple can salvage this little boy’s life in a hurry. I’m sure he’s difficult, unruly and time consuming but he deserves only love, understanding and compassion.

Email ThisBlogThis!Share to TwitterShare to FacebookShare to Pinterest
Labels: adoption

This is a heart breaking story to say the least. I pray for the little guy he's going to need a lot of help and more importantly love.

WOW. How could she? That's about all I can say.

This story is going to have layers on top of more layers. Attempts to make a simple "good" or "bad" judgment are sure to overlook the complexities. My heart bleeds for everyone involved, not the least of which is the little boy.

Bullshit. Read Judith Harris. Some kids have problems no amount of "parental love" can "conquer."

You wouldn't expect "parental love" to correct, say, juvenile-onset diabetes, would you?

Well, there are maladies of the brain which "parental love" cannot correct either.

We are all on this earth in a temporary capacity including that unfortunate child. Love does conquer all, those ills would be far worse without love.

I got a response from Anonymous trying to give me the, “other side of the story.” I’d love to hear the other side exclusively, on camera from the woman who adopted the child. She deserves to be heard and given those tough questions everyone has.

I will meet her anytime and anyplace and will only promise to be fair. I can and will arrange this through a major TV news organization.

I do believe despair drove her to do what she did. Printing this anonymous response is lame and I won’t to it. I will post the entire unedited interview here and promote it worldwide. I can be contacted by e-mail at housedick@gmail.com